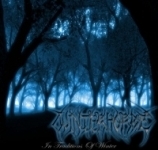 Israel has always been an obscure and even a bit mystery-filled country to me when it comes to Heavy Metal. Over the years I have become familiar with only a small bunch of bands from that country (shame on me!), SALEM, ORPHANED LAND, BISHOP OF HEXEN and MELECHESH (the true GODZ!!) coming to my mind first on top of the pile. WINTERHORDE, this 6-piece Black / Death Metal band, is the next Israelian Metal band that can be added to my small list of bands coming from that particular country. WINTERHORDE plays sort of a combination of both Black – and Death Metal, sounding some of those melodic yet still quite aggressive Swedish Black / Death Metal bands out there (Naglfar and Sacrilege especially) that now defunct Swedish label Black Sun Records put out in the mid ’90s, with a dose of hints that could be thrown to Dimmu Borgir’s direction with a fair justification – thanks to the keyboard element in their sound. I have to admit that the guys are pretty darn good at what they do even if they are far from being any original sounding act or even trying to "re-invent the steel" again. But like I said they obviously have some ear for cool and somewhat catchy song structures as this 4-song offering proves it so clearly. ‘Mother’s Blood’ is strongly a riff-laden tune and has actually lots of great things going on in it, reminding me of the Swedish Death / Black Metal invasion of the mid ’90s period. Also pretty much the same words could be used for the next song titled ‘The Earth Is An Altar’. It also has a strong Swedish vibe being wrapped all over it – and bands like Nalgfar and Sacrilege has this familiar tendency to cross your mind more than just occasionally only which necessarily ain’t that bad thing after all. ‘Raven’s On Lucifer’s Throne’ is a pretty furiously raging track as well with a few mid tempo parts here and there, without doing any that drastic miracles structure-wise, however. The last song on this very promising 4-track demo, simply being titled ‘Winterhorde’, managed to surprise at 1:48 minute mark – and yet again at 2:48 minute mark by bringing up something that is more typical for the Finnish progressive metallers AMORPHIS. I mean, those folkish and melancholic keyboard parts in this particular song in the very question. But they fit to the song very well and seem to work out sort of an obligatory ‘extra spice’ for WINTERHORDE’s realm of dark and murky sounds. As for a honest constructive criticism for them only, the keyboard parts tend to be a bit ‘out of place’ to my ear and I might probably enjoy even more from them if they paid more attention how to arrange the keyboards for their songs just a bit more carefully and better. The ripping guitars parts play an essential role in WINTERHORDE’s sound which is very nice and definitely a big plus for them in my opinion. All in all, WINTERHORDE has already shown its long and sharp beast’s claws for being makers of some killer Black / Death Metal songs that stand out quite effortlessly and have absolutely proved to be a band to keep our eyes out for. As we speak, we (hopefully) don’t have to wait too long for their debut album as WINTERHORDE are currently writing and rehearsing new material for their forth-coming debut album now when I’m writing this. If WINTERHORDE’s debut manages to be anything along the lines of the songs on their "In Traditions Of Winter" demo, then I expect no more than a damn killer, strong and rewarding blackish tour de force from them. I’m glad I took the opportunity to check them out… Website: www.winterhorde.com