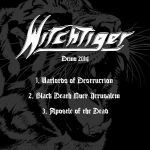 Finnish doomy Heavy Metallers WITCHTIGER have been around for about 10 years, and released a bunch of demo- and split-stuff already that has more or less been available as limited quantities only (just like the band’s 2010 demo, strictly limited to 40 hand-numbered cassette copies only. Now talk about some slight obscurity and mysticism around this troop). However, WITCHTIGER got a fresh recording out just recently; a 3-track demo which contains a very devoted musical journey right into the ancient and nostalgic worlds of both Heavy and pre Doom Metal. You know, if you just happen to love bands like SAINT VITUS, MERCY / early CANDLEMASS, MANILLA ROAD, 70s era JUDAS PRIEST, BLACK SABBATH and such, all of those a bit heavier bands in the spectrum of Heavy Metal, then you should welcome WITCHTIGER to your own household with open arms too. By listening this latest 3-track effort from them, it’s safe to say that the guys in WITCHTIGER are all somewhat well acquainted with this type of stripped down, back to the roots Heavy Metal and pre Doom Metal stuff – keeping things simple and making it all work for them. A song like ‘Black Death Over Jerusalem’ off this very demo in question, is guaranteed to become the band’s next classic song that people want to hear them playing live, just no doubts. Everything on this demo reeks of the past, glorious and virginal times of ancient sounding Heavy Metal – and when carefully predicting some more success for WITCHTIGER, I wouldn’t wonder it a bit at all if they were snapped by labels like High Roller Records or Pure Steel Records out of Germany, someday. May their swords be sharp and raised high, in the name of true Metal in the future too… \m/ And yes, more about these fine men who swear in the name of all things old school, ancient, pompous and epic in Heavy Metal, can be found at: www.facebook.com/pages/witchtiger/319437844775163