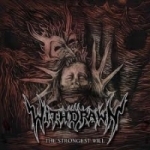 Bordeaux and France. The Helwin brothers and the year 2004. That’s when these 2 brothers put together their band called WITHDRAWN, which in fact, rose from the ashes of another band called DAWN CHAOS. WITHDRAW’s debut full-length studio record ("Skulls Of The Weak") was unleashed in 2009, putting the band firmly on the map of the international Extreme Metal scene – and from those days on, the WITHDRAWN troops have only strengthening their sound by intense rehearsing and playing some shows around, with – and without other bands. The start of 2012 also sees a new record from WITHDRAWN, having Jérôme Guellerin (on vocals and guitar) and Michel Hoareau (on guitar) added to the recording line-up of the band’s new album, titled "The Strongest Will". When it comes to the music itself, this stuff is actually pretty impressive sounding, technical and progressive Death and Black Metal in one package. Or in fact, WITHDRAWN’s sound is much more rooted in Death Metal than Black Metal. Some vocal parts on the record, may link them lightly to Black Metal, but that’s all about it, I think. What is so cool about this record, the guys have clearly put some time into their song structures; building up quite a few, technically challenging different layers around their songs, just to keep things more exciting as well as challenging both for listeners and themselves. At times they bring bands like VADER and THE DECAPITATED to my mind but it would be silly to say they would copycat any of those bands THAT directly, or shamelessly even. No, that’s not the case with them at all. WITHDRAWN have obviously tried to create the kind of sound for this record that keeps them away from any straight comparisons to some other, more established names – and at that, they have even succeeded pretty well in my opinion. The guys have certainly pushed some limits within this record, and undoubtedly making themselves somewhat proud what they achieved on "The Strongest Will" song wise. Predicting the future a bit more ahead, I believe a noteworthy bunch of technical and original Death Metal fans will most likely buy this album in one way or the other, there’s just no question about that. Bordeaux seems to be a very known area not only for a famous wine but also for some damn good Death Metal stuff from this moment on. www.myspace.com/withdrawn1, www.greatdanerecs.com