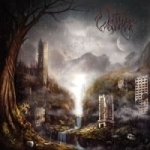 There isn’t much information floating around on the internet about Australia’s WITHER, but from what I managed to find, it seems like this is a one man depressive, sad, gloomy adventure. Having released a split 12" with Germany’s Funeral Doom ensemble WORSHIP they apparently put their name on the map and I’ve read a couple ecstatic responses about it, but those were probably from Gothic teenagers turning into Metal and still struggling to find out who they really are or want to be. In any case, most of such music nowadays is described with prefix "post", which is very helpful, since I can not even bother to listen to it because 99,9 % of the time it is synonymous with "crap". So most hipster journos would probably label them as "post-black-rock-shoegaze" or something, which of course is totally meaningless and doesn’t even begin to describe this pile of crap that’s befallen onto me. So I’ll just try to put it into perspective simply and to the point. WITHER play super-simplistic droning, boring, repetitive riffs, accompanied by catatonia inducing slow / middle tempo beats and vocals which are neither properly sung, nor growled, nor spoken, nor screamed, but more like dreamily babbled. I couldn’t hear any bass, it’s either very low in the mix or there isn’t one at all, the recording quality is decidedly lo-fi and I bet the whole album is unmastered, which adds another shit point to this unbearable listening experience that I had to endure. It isn’t Metal by any means, this is "post"-something, I’m not sure what, though. Their PR release mention influences from KATATONIA and THE SISTERS OF MERCY, first band I can’t stand at all, second is OK, but that statement is taken from the ass, because there’s no way someone in their right mind could compare them with THE SISTERS OF MERCY, there isn’t any hints of them musically. Basically, they try to sell this dumb nonsense as some sort of dark, deep, enganging, atmospheric music, but it just isn’t, go and listen to DEAD CAN DANCE for that, no one did it better although many have tried. At best it can be played as nonchalant background music, it isn’t very annoying and doesn’t stand out. Otherwise you just can ignore it and thank me for saving 40 minutes of your life which you can much better use for sleep. Alternatively, try this if you have problems getting asleep, this might help for sure. www.aurora-australis.com.au