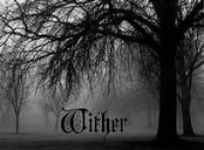 Although classified as "Funeral Doom", Australian two-piece, WITHER, stand out when compared to the many other bands crowding this sub-genre of Metal. WITHER specialize in playing slow, melodic, and emotionally dense Doom that leans heavily toward their Black Metal influences. This Black Metal influence is most prevalent in the vocal delivery and their consistent emphasis on brilliantly melancholic melodies. Indeed, this EP presents a splendid union of these two genres to create some of the finest blackened Doom I have heard, and it further reinforces my belief that Australia has the strongest and most diverse scene in the world at this time. The guitars on these tracks employ a steady and rapid strumming style that stands in contrast to the simplistic drumming technique resulting in a sound that is magnificently rich and textural. Furthermore, the production accentuates this contrast by leaving the drums clean and crisp while the guitars are laden with reverb and mild distortion. This style of production perfectly compliments the depth and fullness of the sound upon which the songwriting so heavily relies for the totality of the effect. WITHER’s lush and full sound builds throughout the tracks and they utilize a highly nuanced approach to make their use of repetitious parts sound unique and highly engaging. Side A, which is, in my opinion, the better of the two sides, features a track entitled ‘Metropolitan’ that begins with a monumentally epic and tragic chord progression that is impossible not to appreciate. Just as the listener is drawn into this dark atmosphere, the band briefly changes to a riff that evokes a slight glimpse of light before descending once again beneath a shroud of opacity. The peak of the track occurs when the song is dissected into its most elemental form and then adorned with a simple and elegant solo that serves to reinforce the sense of solitude the track evokes before it speeds up and culminates in an intense, faster passage. The track on the second side of the EP, called ‘Anthropolitan’, continues in a similar fashion as the first, and produces a very similar effect. The riffs on this track are just as powerful and well-constructed; however, the vocals are less dynamic and therefore add less dimension to the song than they do on the first side. Nonetheless, this side of the EP is still extremely well-executed and easily elicits repeat-play. Overall, I was thoroughly impressed by this EP and look forward to hearing more. I question whether this formula can translate into a full-length release without becoming redundant; however, judging by the level of musicianship and songwriting on this EP, I tend to believe WITHER will find ways to expand and alter their sound to produce more varied recordings in the future, and I am certainly looking forward to hearing whatever it is they offer up next. witheredpain@gmail.com, info@turannum.com