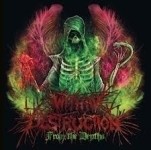 WITHIN DESTRUCTION
From The Depths
(Noisehead Records)
41:27min

There’s something going on in Slovenia. I mean it’s really remarkable how many bands have emerged lately from the underground of this small European country. It seems the scene has been in a kind of slumber but now it is ready to explode. Even labels from abroad show more and more interest in the country’s outfits as releases from ERUPTION, NEGLIGENCE and in our case WITHIN DESTRUCTION impressively prove. This Death Metal machine from Jesenice (formed in 2010) was signed by Austrian based label Noisehead Records and unleashed their debut "From The Depths" upon this rotten planet in September last year. Nine tracks are embedded on this little silver disc which offers a wide range of extreme Metal frenzy but mostly sticking to the basic ingredients. A good example is the excellent tune ‘King Of Serpents’. The quintet comes up here with a cool mix of bursting speed and tempo changes. All is spiced with Thrash influenced, twisted rhythms / riffing, refined with some melodic lines. This pattern is used throughout the entire album. A solid blend of (modern) Death and Thrash done with youthful enthusiasm and energy. Of course you can’t expect that "From The Dephts" invents the wheel new or is in any way a revolutionary effort but it has for sure its moments and is able to entertain you for a little bit more than 40 minutes quite well. Though this young horde isn’t yet able to compete with the bigger names in the genre the album offers solid craftmanship with well executed songs and a decent / dynamic production. All these facts should actually make you curious to give them at least a try. Some other highlights besides the above mentioned track are ‘This Misery’, ‘Price Of Heresy’ or ‘God Of The Soulless’. You can get more infos by visting the band’s website at www.facebook.com/withindestructionslo.