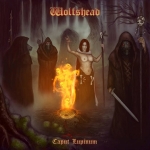 If you ever believed that there’s only extreme or sick music coming from Finland, you might not be too wrong. The land of the thousand lakes offers a variety of strange sounds, yet there’s also a lot of bands that are more clinging to traditional musical values. WOLFSHEAD from Oulu is one of them. The four piece doesn’t seem to be familiar with modern Metal of any kind. Instead, they play traditional Metal with a distinct Doom edge. “Caput Lupinum” (the Latin translation of the band name) is their first EP for a label after two self released demo CDs. Godeater is the label lucky enough to release this one. Lucky? Yes, because “Caput Lupinum” is a little gem of classic Metal, with songs so timeless that it’s a pure joy. The opening band anthem ‘Wolfshead’ already offers great grooves and a vast understanding of how Doom Metal riffs have to be. The following ‘Mark Of The Devil’ is of a similar style, and has a great melodic chorus as a special extra. With ‘Leave Me Burnin”, we have a classy song that is very much based on classic Metal of the 1980s, especially the NWOBHM. The EP finishes with ‘A Shadow In The Rain (London 1888)’. This one convinces with some BLACK SABBATH riffing and a distinct gloomy feeling, thus closing the mini-album in a very worthy manner. There’s just one thing left to say after this pearl of a song: hitting the repeat button! And hoping for a full album as well. More information about WOLFSHEAD at wolfsheadfinland.bandcamp.com or www.facebook.com/wolfsheadfinland. And don’t forget to check out the label at www.facebook.com/godeaterrec