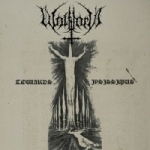 From hour number one Black Metal was special, it was more than just playing music with your friends in a dark cabin in the Norwegian, Swedish or German woods. There was a ‘certain’ satanic ideology covering the whole movement and in 2010 this basic rule still counts! From this perspective there isn’t any reason to doubt the 100% dedication of the German terror act WOLFTHORN. But every band – even if we are talking about their third full release here, accompanied since their founding in 2001 by several splits and demos – should accept the justified question if their (latest) creation can really add something to my / our / their dark cult – and I’m for sure not asking for musical miracles! But at a certain point – and I’ve arrived at this crossroad years ago – there is definitely no point in arguing that any haunted soul on this black planet needs a further 6 songs GORGOROTH vs. DARKTHRONE EP. The release comes with an impressive artwork but despite this fact the music isn’t impressive at all even if the band tries to vary their play by introducing some minor counterpoints. From my side there is unfortunately nothing to add, you get exactly what you expect and this time this means a 100 % version / clone of the well known (mainly) Norwegian Black Metal agitations. www.art-of-propaganda.de, www.obscure-abhorrence.com