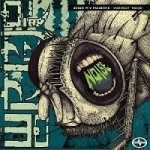 A palpable hostility immediately surges from the speakers as WORMROT’s latest EP, “Noise” kicks off with ‘Loathsome Delusions’. Barely five minutes in length, “Noise” might be a Thrash Metal styled Grindcore song, rather than one divided into five. Nevertheless songs such as ‘False Assumptions’, ‘Perpetual Extinction’ and ‘Breed To Breed’ – which sounds like a NAPLAM DEATH song – serve up punctuated but ruthless grind. The song ‘Outburst Of Annoyance’ goes a long way in conveying the proper sense of what this EP is all about: an outburst of hostile Grind. There’s really not much more to talk about as the thing lasts for a grand total of five minutes’ running time. Since it’s not worth buying anything with just one song on it Scion A/V and Earache offered “Noise” for download. Copies of the CD were given away for free at Scion shows. Great stuff – definitely something to listen to more than once. More at www.myspace.com/wormrotgrind, www.facebook.com/pages/Wormrot/237638635639, www.scionav.com