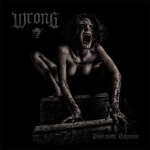 WRONG from Madrid is a two-men project, that came together in the year 2012 a.d., to create depressive Black Metal or Suicidal Black Metal, if you want to name it that way. Since SHINING and old FORGOTTEN TOMB are the names you need to compete against, I simply let the music speak and gave their second album "Pessimistic Outcomes" several spins to drown into their world. The challenge in that genre is divided into two categories. The first one is not to copy the creators of that genre and the second one is not to sound either too Black Metal nor to weepy, that the music gets boring. This mission seems completed as they do not copy their influences, they really find their own line and use their influences carefully to create something unique. The fourty-six minutes are divided in five long tracks. The production and instrumentation sounds very well. The first track ‘Thru The Grey Path To Nowhere’ with its slow rhythm guitar somehow reminds me of old KATATONIA or even DAYLIGHT DIES, until the blast-beats start, followed by a Scandinavian sounding lead guitar melody. The harsh and tortured screams of vocalist Phlegeton fit well into this style and their music, changing between fast Black Metal and slower Doom Black Metal, accentuated with some careful used keyboard sounds. The second track ‘His Hatred Breathes’ also has some traces of KATATONIA before the fast drumming starts and lets loose the desperation. This track is really outstanding, as the vocals (between screams and effected whispers) fit perfect to the melody line. Also the slightly used keyboards create a real somber atmosphere. A real highlight. ‘Dragging My Soul Until The Sunset’ is starting with whispers, keyboard effects and careful percussion before turning into another desperate monster. The last track ‘I Thought I’d Woken’ starts like an old track of FORGOTTEN TOMB. The vocals on this track differ from the rest and sound a lot harsher and more Black Metal like. This track lives from the vocals while in the remaining tracks the vocals were part of the whole picture. Somehow this track seems to be the fifth and last chapter of a desperate fight, which comes to an end then. Recommended soundtrack for the ones, who want to end their life. www.facebook.com/wrongblackmetal, www.xtreemmusic.com