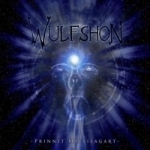 From Buenos Aires, Argentina comes a Pagan / Viking Metal act called WULFSHON, which only tells there’s really no boundaries for any musical Metal style or genre that one could not find from just any corner of the world. So, dear Metal brothers and sisters from all around the world, let’s get united! Hails to Thor, hails to Odin, hails to Týr – and hails to all Metal-spirited souls around the whole world. The world is ours – and the world is these Argentine Viking warriors WUFSHON’s too as far as the band’s debut album, "Prinnit Mittilagart" is concerned anyway. Despite coming from a country that obviously does not have much to do with the Viking culture or mythology or whatever Viking related matters, it must be said that I bet anyone could hardly guess if asked about a homeland of WULFSHON when spinning "Prinnat Mittilagart" to people. WULFSHON do their own Viking Metal thing in a pretty convincing and decent way, borrowing obviously bits from here and bits from there, to get a wooden Viking wheel rollin’ smootly enough for them on their debut record. Early AMON AMARTH, early MOONSORROW – and assumable bits from BATHORY’s Viking era and ENSLAVED’s early works, could well be associated with the songs on "Prinnit Mittilagart", even if in the same breath I don’t hesitate to mention that even if those band comparisons are there, WULFSHON’s own approach to their Pagan and / or Viking Metal, clearly lacks some of those vital elements that make bands like BATHORY or MOONSORROW such superior bands like they are, as regards the musical ideas and realization that they are able to offer on their debut. However, in addition to that it also be mentioned that WULFSHON have just started their own crusade, so one can never know really what these Argentine Viking warriors may be able to accomplish on their forth-coming releases. For what "Prinnit Mittilagart" represents strictly as a debut album of theirs, it does represent it in a relatively decent way tho. The name is already out there now – and I really don’t see their longships sinking yet. Go to: http://wulfshon.com.ar, www.artgatesrecords.com