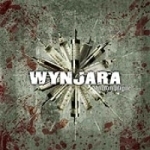 Featuring ex-members of MONSTROSITY and members of DIVINE EMPIRE in their ranks one could expect WYNJARA to be a kind of "all-star Florida Death Metal group", but though the musical fundament is definitely to be found in the Death Metal department (with strong parallels to DIVINE EMPIRE) WYNJARA have a rather progressive and unique approach to it. Implementing keyboard sounds, atmospheric and slightly spacy melodies, moody instrumentals, a drum computer (urks!!!) and linking the various elements in their sound with the mentioned Death Metal framework "Human Plague" is something you don’t hear too often, right? It’s like as if later EDGE OF SANITY collided with DIVINE EMPIRE and apart from the computerized drummer the 12 songs on "Human Plague" are an successful experiment offering a rather unusual musical journey coming across natural and unforced. The sterile sounding drums unfortunately have a certain negative effect on my personal listening experience since its clinical aura totally contradicts the emotions and ambience "Human Plague" carries and by performing complex, progressive rhythms a human drummer could have been the icing on the cake. That’s really the only thing I can’t stand on this album, apart from that WYNJARA’s second effort is a bit of a fresh breeze, so if you are a little more tolerant on programmed drums and enjoy progressive Death Metal with structure and feeling check it out! www.wynjara.us offers more infos on the band and www.nocturnalart.com even has a sound file online.