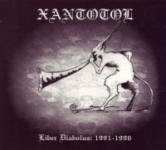 When we talk about the early Polish Black Metal scene names like Graveland and Behemoth immediately come to mind, acts that would be considered as the forefathers of the Polish Black Metal (necro)sound. But not many people remember that another obscure act existed sowing the seeds of evilness and storming near the Baltic those days (early 90s)… they were called  Xantotol, originally formed as a two piece act by Mala (yeah, she’s a woman) on guitars and voice and Venom as drummer, later joined by Siwi on bass. With this line up the band recorded 2 demo tapes and a cassette from 1991 through 1996, with a very positive response from the underground hordes. Lately I got a promotional CD from a new record label from Poland called Kampf Records who released this compilation CD featuring everything officially recorded by the band: the “Glory For The Centuries” demo I from 1991, “Cult Of The Black Pentagram” demo II from 1991 (originally released by Witching Hour Productions, an underground label ran by the vocalist of the polish Hermh) and the self released cassette LP “Thus Spake Zaratustra”. But how we can describe the Xantotol sound in a few words? Obscure, raw and very cold Black Metal in the vein of Samael at their earlier stages. As we can expect, the sound is beyond this age, so no more words about it. The release itself is amazing, on deluxe digipak format, including bio, pics, etc. I don’t really know what more to add, because you Black Metal freaks shall love this collector’s item of a true lost cult (as I do). For more details check out www.kampf.ws or just write to kampfrec@go2.pl