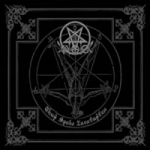 Some of you can remember the review I did sometime ago about the "Liber Diabolus: 1991-1996" demo compilation CD from this obscure Polish act… Well, after that review and the response from that one, the guy of Witching Hour Productions (the vocalist of HERMH) decided to re-release the band’s only album (originally released on tape) in its full glory on CD format on an awesome digipak. And thanks to Jacek (a.k.a. Venom, XANTOTOL’s drummer) I got this dark jewel, fulfilled of obscure emotions, raw sound, harsh and truly going under the skin vocals (courtesy of Mistress Mala), what can be immediately connected with the early works of bands like SAMAEL, VARATHRON, BATHORY and even country mates / contemporaries like GRAVELAND and BEHEMOTH (please note I’m comparing only the earlier works from all the bands). So I guess you can get a clear picture (between all this nebulous darkness hahaha) of the sound of XANTOTOL, even you can discover that a lot of the current so called Suicide Black Metal bands sounds quite similar to what XANTOTOL did 15 years ago, so a credit must be given to this underground cult. As I wrote in the previous CD review, the sound is beyond this age, so any criticism about it is not acceptable. Finally I want to add that most of the lyrics, as you can easily notice through the album title, are taken from the book of F. Nietzsche also some excerpts from "The Book of the Law" by the Great Beast Himself (a.k.a. Aleister Crowley). A piece you can not miss in your collection. Contact www.witchinghour.pl