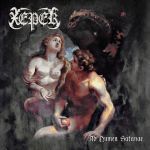 XEPER is a project I totally missed out on. Active since 2007 already, the guys release their fourth full-length this time via Soulseller Records. As the members have been involved at least as live musicians in bands like GORGOROTH, IMPIETY and SETHERIAL they are no rookies at all. The intro ‘Fiat Interitus’ has a DISSECTION vibe, but also offers some Italian vibes. This is surely caused by the Italian roots of parts of the members now located in Norway as far as I know. ‘The Hidden Genesis’ offers fast Black Metal with grim vocals and pretty melodic lead guitars. The drumming is solid and very well, but already shows the first and biggest weakness of the album. The drum sound is simply horrible. ‘Under The Will Of Satan’ slows down a bit and offers another solid track with choral vocals and pretty good guitars. The chorals and spoken passages are no bad ideas but really bad produced. Only the good lead guitar saves the track and turns it for good. ‘Riding The Spiral Of Lillith’ is maybe the strongest track of the album and offers a more grim and cold side of their interpretaion of Black Metal without missing a good melody line. Mixed with the grim vocals definitely a good track and full of potential. Especially the guitar work and the little solo part is pretty outstanding. ‘Purity And Death’ has a DARK FUNERAL touch and starts with fast and intense drumming. Unfortunately the vocals are overdone here and don’t fit to the music as they are effected far too grim here and the band is not DARKTHRONE. ‘Snake That Brought The Flame’ starts fast again but offers solid guitar work again on the grim fundament. Later it turns into a more Death Metal track, influenced by Polish bands like BEHEMOTH or VADER before the title track ‘Ad Numen Satanae’ closes the album with uptempo Black Metal. Definitely a good track, but with some strange screams behind the caws. Especially the stringed part is very well effected and gets varied by some calm keyboard sounds. Of course the project has potential but the direction is not really clear and for a proper release the production is only on demo level and the drum sound really destroys any kind of joy of listening. Hopefully both, band and label, will consider to invest more in their music as this could turn out a lot better. www.facebook.com/xeperofficial, www.facebook.com/soulsellerrecords