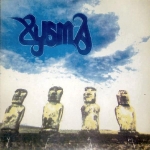 XYSMA is definitely a legendary name in the Death Metal / Grindcore history, being the first Finnish band to play very similar to early CARCASS and NAPALM DEATH, with the demo "Swarming Of The Maggots" being their first musical abortion. They spent the “tape trading years” with pioneers as CONVULSE, FUNEBRE, ABHORRENCE, NECROPSY, DISGRACE, LUBRICANT, UNHOLY, DEMIGOD and the likes. A band with a too strong personality to channel themselves in the strict borders of extreme Metal, so they changed a lot and there are very different works in their discography, from the just mentioned Goregrind demo to the more Death Metal stuff that forunned the 70s Rock turning point of the 1993 album ‘First & Magical’. Before that, in 1990, XYSMA recorded, in my opinion, their masterpiece, the first full-length "Yeah". Grinding Death Metal with influences from BLACK SABBATH, the opener ‘Why Am I?’ totally represent their eclectic attitude, a perfect song with Death / Grind and Stoner Rock riffs written with awareness and taste. ‘On The Hill Of Desecration’ is absolutely my favorite song from XYSMA, originally recorded for the "Fata Morgana" EP and here proposed again and performed hugely better. Other great tracks are surely ‘Above The Horizon’ and ‘Until I Reach The Unattainable’, but there aren’t weak tunes here, this album is coherent and inspired to the end, rich of brillant ideas and performed with skillful talent. What to say more? You have a good opportunity to get this essential record again now thanks to this reissue, released by Vic Records on CD, with the EPs "Above The Mind Of Morbidity" and "Fata Morgana" as bonus material (a vinyl version is also available, without bonus tracks). I’ll never get tired of listening to "Yeah". More information at: www.facebook.com/xysma, www.vicrecords.com