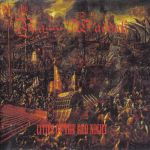 Recorded and released already in December 2012, the “Cities Of The Red Night“ EP made its way from Venice, Italy, all the way to Voices From The Darkside. The four band members are completely possessed by the American author William Borroughs, from whom one or two may have read something. The band name originates from a novel by Borroughs, the EP is entirely based upon the story of the same name and even the cover artwork (Pieter Brueghel the Elder’s 1562 painting “The Triumph of Death”) is the same like on the first edition of the book. “While young men wage war against an evil empire of zealous mutants, the population of this modern inferno is afflicted with the epidemic of a radioactive virus.” – a quite interesting synopsis. Same goes for the music, mainly based upon Black Metal from the early 1990s era. The track ‘Moves And Checks And Slays’ sounds like IMMORTAL on “Pure Holocaust”, the opening riff clinks nearly exactly like the one of ‘Eternal Years On The Path To The Cemetery Gates’. But it is only that riff, not the whole song. Altogether the five songs refer a lot to bands like SATYRICON and MARDUK, especially the vocals, the powerful guitars and the change between aggressive fast-forward and crushing mid-tempo parts. On the one hand nothing really new, but on the other hand it is well done and I really enjoyed the music. Noteworthy the clear sound, every instrument is able to make an impression on the listener, something many bands did not manage on their first recordings. Interesting concept, gripping songwriting, good sound, competent musicians – an entertaining release. More info at http://yass-waddah.bandcamp.com, www.facebook.com/pages/yass-waddah/230581127063706