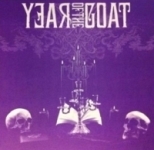 Something completely different for a change as the menu for music reviews is served for me usually. As a tiny background info, YEAR OF THE GOAT from Sweden (a great band name, btw), has been put in flesh and blood by Thomas Eriksson (on vocals and guitar) in 2006 – and to complete his puzzle of dark visions about YEAR OF THE GOAT, he also recruited Per Broddesson (guitar), Jonas Mattsson (guitar), Tobias Resch (bass) and Fredrik Hellerström (drums) to give a steady lineup – and first and foremost, the sound for the band. YEAR OF THE GOAT’s first outing, this 4-track mini-CD titled "Lucem Ferre" (which is Latin, meaning ‘The Bringer Of Light’, or ‘The Son Of Desert Fire’ – or just ‘Lucifer’), could be described as Occult Doom Rock musically; having a strong link to early 70s Satanic / Occult stuff (BLACK WIDOW, COVEN) – plus also guiding listeners to see them as a part of new rocking satanic and occult generation, in which bands like GHOST, BLOOD CEREMONY, DEVIL’S BLOOD and the likes, have almost just recently come forth to darken the light of Christ. The music itself has lots of bottomless depth in it, moody and airy atmospheres being very integral parts of YEAR OF THE GOAT’s sound. The aesthetic of comfortable darkness and always intriguing mysticism are true strongholds for these masters of dark and sinister art, which they haven’t hesitated to sink their musical creativity and collective minds fully into. "Lucem Ferre" simply glows top-notch quality all over the place, filling us with all that we tend to consider so brilliant in the type of Satanic / Occult, lightly prog-ish Doom Rock that is presented from the depths of dark chambers of this fine Swedish newcomer named YEAR OF THE GOAT; a band to be reckoned with especially among the fans of 70s evil and psychedelic Doom Rock fans. A cover of the Sam Gopal song, ‘The Dark Lord’ (originally sung by no less than Lemmy), has something truly capturing yet unexplained in it, too. Perhaps that’s that song on "Lucem Ferre", in which the dark lord himself, Lucifer, wants to talk with you most – to invite you to join his ever-growing troops, ha! Anyway, "Lucem Ferre" reeks of sheer brilliance. This is exactly how I want my daily dose of moody and atmospheric, 70s-tinged Satanic Doom Rock served for me. www.facebook.com/yearofthegoat, www.van-records.de