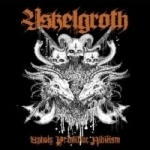 Between great bands such as TEITANBLOOD and NOCTURNAL VOMIT, Spain seems poised to threaten the world once again with an armada of hell’s ships. For reasons I can’t identify, YSKELGROTH, the loudest and proudest addition to Spain’s war effort, are classed as a Black Metal band. Nothing could be further from the truth. This band is not only Black Metal. As is the case with today’s great bands (DIOCLETIAN, VASAELETH, etc) the band is composed of parts that constitute a greater whole, and that whole is, thankfully, not some adolescent’s inherited concept of a forest in the snow. Real Black Metal is an art form and like all art forms, the rules are ambiguous. YSKELGROTH is a Black Metal band only in that they play dark music. The rest of the time they’re blissfully unaware of silly distinctions and let the metal erupt in a miasma of influences. That kind of passion is where real Black Metal is made. So, only in a loose sense is this band a Black Metal band. An impressive debut. But hurry – the CD is limited to 1000 copies! www.myspace.com/yskelgroth, www.regimentalrecords.com