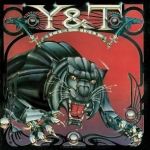 This album brings back a lot of great memories. In my childhood I used to live in a very small town. Specialized music magazines and internet didn’t exist yet, so the only possibilty to buy new records were two hifi stores that (besides selling TV sets, record- and cassette-players) also had a small section of vinyl records. To my surprise they always had some new Hardrock stuff among all the Volksmusik, Pop and Disco releases as well. Some of the bands I was already familiar with (SAXON, DEF LEPPARD, MOTÖRHEAD, KISS, AC/DC…), but the more obscure releases, I always discovered through their album covers and band logos. "Black Tiger", from a band with the strange name Y&T, was one of those records that immediately caught my attention because the artwork was a real eye catcher for sure. After I listened to a couple of tracks with headphones on I was blown away! From the opening short instrumental ‘From The Moon’ to the closing ballad ‘Winds Of Change’ (not to be confused with the almost similar titled cheesy SCORPIONS track) these guys just delivered top notch songs that appealed to me in every way! No matter if you chose to listen to an uptempo cut like ‘Open Fire’, the amazing titletrack or the hymnic ‘Forever’, this album had it all: great musicianship, lots of variety, a decent heaviness, strong melodies and on top of it a vocalist that could actually sing, but never sounded cheesy! The production, courtesy of Max Norman (who had just made himself a name through working with former BLACK SABBATH frontman OZZY OSBOURNE), totally fitted the music and enriched the material even more. This was by no means a typical American sounding band and from what I found out later, a big part of their loyal following was actually from Europe (the album was even recorded in the UK and the band did a very successful tour overhere during their stay in 1982). Even though "Black Tiger" has been re-released various times throughout the years, I hardly saw it in record stores for quite a while now, so this high quality re-release is definitely more than welcome and a good opportunity to finally add it to your collection after all. It comes with the typical fat Rock Candy Records booklet (including liner notes and vintage pics), has been remastered and even features a previously unreleased bonus track (‘Somebody For Me’). "Black Tiger" is one of the strongest albums in the long lasting career of Y&T and this edition makes it even more valueable! For all further band information check out www.yandtrocks.com, ordering details should be available via www.rockcandyrecords.com