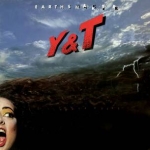 When I discovered San Francisco based Hardrockers Y&T back in the early 80s, they already had three full length albums released. The first two, "Yesterday And Today" and "Struck Down" (both still released under their previous moniker YESTERDAY AND TODAY), were pretty hard to find in my area back then, and their 1981 A&M Records debut "Earthshaker" (the first release with their shortened bandname) I missed as well at first, because it was only available as an expensive import at that time. So, it was "Black Tiger" and "Mean Streak" (from 1982 respectively 1983) that introduced me to these guys. Many fans of Y&T still consider "Earthshaker" as their absolute best album and that probably is true. But due to the fact that I got to hear it a couple of years after the aforementioned two records, it never reached the same status for me. But no matter which one you consider your personal favorite, "Earthshaker" definitely is their rawest offering and contains a lot of tracks that easily stood the test of time and that still end up in the band’s setlist these days: ‘Hungry For Rock’, ‘Dirty Girl’, ‘Rescue Me’, ‘Hurricane’ or the amazing ballad ‘I Believe In You’ are just prime examples of melodic, yet ass kicking Hardrock. But also lesser known songs, such as ‘Let Me Go’ or ‘Knock You Out’, are still highly impressive more than 25 years later. The amazing voice of singer / guitarist Dave Meniketti, who reminds of Sammy Hagar quite a bit, and the kick ass songwriting gained them a lot of fans, especially in Europe. I still remember that Y&T was highly respected by fans of all kinds of musical genres and that they often got associated with the NWOBHM movement, probably because their career started to take off around that time as well. And the fact that even a pure Metal label like Metal Blade Records released a Y&T live album back in 1991 ("Yesterday & Today Live") should give you an idea of the high quality of the band’s material. This Rock Candy Records re-release unfortunately doesn’t feature any bonus tracks, but it got remastered and comes up with the label typical, fantastic booklet with lots of old pictures and in-depth liner notes. "Earthshaker" is without a doubt an eternal Hardrock classic and worth being (re-)discovered any time! More info at: www.yandtrocks.com, www.rockcandyrecords.com