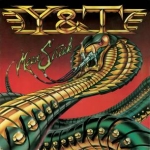 In 1983, when Y&T released their fifth album "Mean Streak", they were supposed to support OZZY OSBOURNE on the German leg of his "Bark At The Moon" tour in December of that year. One of the shows was also scheduled to take place in Bremen (which is a bigger city, approximately 30km from where I lived back then), so together with a friend of mine I took a train that particular evening to check both acts out after all. We were both really looking forward to it, since the bands’ records had been played by us countless times already. But when we finally arrived at the venue, all we found was a handwritten note on the front door, saying that the OZZY OSBOURNE show was cancelled. Two 17 year old boys were heavily disappointed, to say the least, so we returned home with the next train again and wondered what might have been the reason for the cancelation. These days something like that would have been spread through the internet within seconds, but back then the only real source of information we had were newspaper and radio, unfortunately. And especially when it came to a Heavy Metal concert, that media wasn’t necessarily helpful. Back home again all we could do was play those records, that we had hoped to hear live that night, including Y&T’s "Mean Streak". The band’s two previous releases, "Earthshaker" and "Black Tiger", might have been a tiny little bit stronger, but "Mean Streak" nevertheless delivered a whole bunch of excellent songs once again. ‘Mean Streak’ (for which the band also shot their very first video), ‘Hang ‘Em High’, ‘Breaking Away’, ‘Straight Thru The Heart’ or the semi-ballad ‘Midnight In Tokyo’ were all exceptional Y&T Rockers that still sound incredibly fresh these days. Experienced producer Chris Tsangarides (who previously had already worked with THIN LIZZY, ANVIL and a bunch of others) helped the band in the studio to come up with a fitting production, which was heavy and melodic at the same time. "Mean Streak" was furthermore blessed with another amazing cover artwork, courtesy of John Taylor Dismukes once again, who already created the fantastic "Black Tiger" sleeve. Y&T still continued to release great music after "Mean Streak" (but unfortunately also received a lot of shit for the MTV friendly ‘Summertime Girls’ in the years to follow), but their best three records are without a doubt "Earthshaker", "Black Tiger" and "Mean Streak", which all have now been made available again via Rock Candy Records. Apart from the typical fat booklet with liner notes and old pictures "Mean Streak" also offers the previously unreleased bonus track ‘I’m Not Sorry’, so if you ever thought about buying a copy, this is the best option for sure. More info at www.yandtrocks.com, www.rockcandyrecords.com