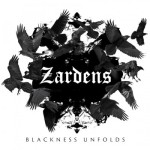 Belgian quintet ZARDENS returns with their sophomore album “Blackness Unfolds”, and it is no less than a pure lesson in violence. As the famous Belgian proverb says, “a single spot stains the whole dress”, so here are 10 straight forward Black Metal songs with an extra Thrash and Death Metal touch delivered spotlessly tight!!! It’s a very comprehensive album, with mostly Thrash beat and blast beat drum variations, sharp guitar on both riffs and solos, and also some almost slumbering bass lines sustaining them. But they also managed to interweave some slow tempo passages, which in my opinion suited them really well since they are placed in moments that either create a darker atmosphere or break the constant head-banging frenzy the fast riffs provoke. The vocals are particularly moderate in comparison to the rest of the band, not filling in every riff and working on the same level as the rest of the band. This is usually quite difficult for bands with singers that are not playing instruments while singing, and I have seen many bands with similar line-ups failing at creating such atmosphere as ZARDENS did especially because of the overuse of vocals. “Blackness Unfolds” is, however, nothing new to any Black / Death Metal avid listener. Anyone who has spent some time listening to this album will easily find similarities with many Scandinavian bands, but that are particularly played with a higher enthusiasm, velocity, and somehow, a thrashier approach by the Belgians, giving it a certain character. It is an album that has the necessary personal touch that I find to be likable in a music style that is so vast but at the time so strict to its basic foundations. Moreover, it also gives you the impression this is a band worth checking live, for if they are as good on stage as they sound in their album, they certainly will unfold the blackness out of you. Check out more info about them at www.facebook.com/zardens or http://satanath.com/sodp 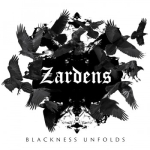 In the year 2015 the decent follower, even of the most undergrounded and clandestine sub-genres, has to realize the vast and unimaginable amount of bands. Sometimes it even occurs that a fanzine editor is using the name of a well-known fanzine / online magazine and this fact remains undiscovered for more than ten years. Very often it is pure coincidence what bands I listen to, the next interesting songs are just one click away. This time around it is ZARDENS from Belgium with their self-financed album "Blackness Unfolds", the five guys asked for a review and here we go. The second full-length by ZARDENS (still wondering about the origin of that name) is some kind of Death / Black Metal general store, which by no means is intended to be seen as negative. Nothing new or innovative, but the musicians definitely know how to handle their instruments and the sound is clear and massive. At first sight I thought this is the typical fast-paced Black Metal in the vein of DARK FUNERAL, MAYHEM ("De Mysteriis Dom Sathanas") or MARDUK plus DESASTER fashioned Black / Thrash Metal. But then I realized the biggest influence – DARKTHRONE. But not the Black Metal era, nope, it is the Death Metal period(s) of time, i.e. "Soulside Journey" and "Total Death". The one aspect I like most about "Blackness Unfolds" is the simplicity and straightforwardness. No needless elements, not even a riff or break too much. Some kind of Punk Rock attitude. But just the attitude, the eight songs (plus intro and outro) are blackened Death Metal (the term used by the band) to the bone. By mixing Black and Death Metal in this way the band avoids being a copycat and getting lost in the mass of sqillions of bands. As far as I am informed "Blackness Unfolds" is limited to 500 copies, so you better hurry up to get your copy. www.facebook.com/zardens