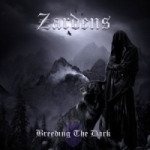 Belgian Black / Death Metal act ZARDENS was formed by Warnacht in 2008 – and it took 3 years from this 3-piece Belgian act to get to the point when they were ready to enter the studio, to record the band’s 1st studio album. This 8-track effort, which is titled "Breeding The Dark", has mostly been inspired by the Scandinavian melo-Black and Death Metal à la DISSECTION, NECROPHOBIC, WATAIN and perhaps even a host of others, but at least one gets a pretty good picture where ZARDENS also comes from based strictly on the musical perspective of their main influences. I can absolutely subscribe some of these Scandinavian (or may I say, Swedish) influences in ZARDENS’ sound as at times they indeed stick out from their song structures in such an inevitable yet strong way. But then again, I also have to say that I don’t find that many of those overly chilling and memorable atmospheres within their stuff that made a band like DISSECTION – that is rightfully considered as one of the most influential forefathers of the whole Swedish Black / Death Metal scene, such a superior act back in the day, compared to some other bands with the same ink. However, don’t read me wrong because the guys in ZARDENS also happen to know how to write some catchy and original songs, as the whole album proves that. It’s just that they are still at that early stage of musical progression when they are slowly but determinedly locking pieces into the right places in this big puzzle that may eventually leave an irreversible mark about them on the vast map of Black / Death Metal underground scene in later years. They already do have all the right tools in their hands to make things really happening for them, "Breeding The Dark" surely yet securely opening some doors for them already. So, some pretty good and tastefully done Black / Death Metal stuff here all in all, which gives me a good enough reason to expect a bit more improvement from them in the future song-wise as well. More about ZARDENS at: www.zardens.be, www.ultimhate-records.com