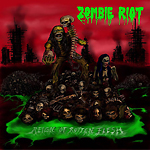 "Reign Of Rotten Flesh" is the first full length album by the German band ZOMBIE RIOT, recently released by Unholy Fire Records. A total of ten songs for almost 37 minutes of uncompromising Death Metal, influenced both by the American and the European scenes from the late 80s and the early 90s. The production is very clear, powerful and professional: a huge Death Metal sound that is very reminiscent of the classic masterpieces recorded by Scott Burns at the legendary Morrisound Studios. ZOMBIE RIOT play a kind of Death Metal that isn’t particularly fast, although there are few parts with traditional style blast beats (a high tempo kick and snare groove in alternation). If I had to judge these guys on a scale of brutal intensity, their blasting parts would get a very low score, because they are played poorly and are not effective at all. But ZOMBIE RIOT do their best when they play mid tempos, typical d-beat style Death Metal accelerations or slow and groovy parts; yes, in these situations they become a winning team. So, just to give you an idea of how "Reign Of Rotten Flesh" sounds, its style and song structures are comparable to those of legendary albums such as: "Cause Of Death" and "The End Complete" by OBITUARY, "Haunted" by SIX FEET UNDER, "Realm Of Chaos" and "War Master" by BOLT THROWER, "Dying Remains" by MORTA SKULD, "Mindloss" by GOREFEST, "Skin The Living" and "Slaughter The Weak" by JUNGLE ROT. I mean, "Reign Of Rotten Flesh" doesn’t obviously reach the peaks of these titles, but is a decent imitation. The formula is simple: catchy riffs, tons of double bass and growling vocals (unfortunately not as deep as Chris Barnes’ ones). Here you won’t find any technicality in the vein of "Scream Of Anguish" by BRUTALITY or extreme brutality à la MONSTROSITY, just an honest Death Metal debut album filled with riffs and structures that you probably have listened to at least a thousand times. So, if you’re into unpretentious Tampa-style Death Metal and you’re looking for new bands, "Reign Of Rotten Flesh" might be an interesting addition to your collection. There’s only one big problem with this album: the front cover artwork. Here we have a ridiculously horrible comic-style digital drawing. I would never buy an album with such a bad artwork. I’m a die hard fan of zombie themes and I think that the combination of zombies and Death Metal is a tradition that must be kept alive. Reducing artwork to a formality is a big mistake, because the front cover is something that must catch people’s eyes. By paying for a killer and professional artwork, you’re investing in your band’s visual identity; don’t forget that! More info at: www.facebook.com/zombieriotband, www.unholyfire-records.com