The legendary British band CANCER is back with its sixth full length album entitled “Shadow Gripped”. An intense piece of old school Death Metal that takes us back to the golden age of the genre. We’ve contacted drummer Carl Stokes for a quick chat about past and present.


Ok, let’s start with the most recent news. CANCER has just released its sixth full length album entitled “Shadow Gripped”. I really enjoy this new full length and I have to admit that to me it’s one of the best albums of 2018. Since John lives in Spain, I guess you haven’t many chances to rehearse together. Can you explain us your current method of composing and arranging new songs? How long did it take to complete the whole album? 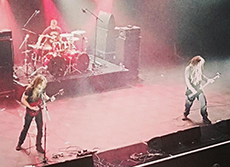 "I’m glad you like it! Our method was the same. John gets some riffs, I then I start putting some rhythms around them and they just start to form into songs. The difference now with John living in Spain is that we utilise the Internet. I have a studio, so I did some arranging and stuff, and then passed them on to Ian who put his bass on. The whole thing took a couple of years as there was no rush and we wanted to have the best material we could write."

It was recorded in two studios, right? John in Spain, you and Ian in Wales. How do you define your first experience releasing an album based on remote working?
"It was really exciting putting our ideas down and having them realised. It was a little strange that we were not all in the studio at the same time, but we have worked together for thirty years so everyone was there in spirit, and again the Internet make distances smaller. I think we all felt the album was good when we listened back." 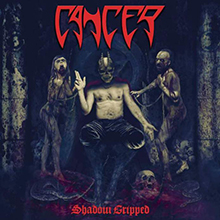 “Shadow Gripped” sounds like it was recorded in the early 90s. I mean, it has a strong old school Death Metal vibe and that’s great, especially if compared to those ultra modern and overly produced releases that infest the scene nowadays. How did you get this sound? It’s very reminiscent of your early works. Please, tell us something more about the mixing and mastering sessions.
"Well, I personally wanted to just get back to basics and capture the band as it is without over polishing it, something that Simon Efemey was on board with. It was about capturing vibe and raw power and let the songs do the rest."

This is a killer album, from start to finish. If I had to find a weak point in “Shadow Gripped”, I would say the cover artwork, mostly because I don’t like digital drawings and I used to link CANCER with the legendary “To The Gory End” artwork inspired by “Dawn Of The Dead”. Yes, the new art is pretty sick and gory, but it doesn’t completely convince me. Can you give us any details of the artwork concept and who did draw it?
"Well, art is a subjective thing I guess. So Matt Vickerstaff did the art, but the consent is mine. The image is taken from the devil card in the tarot, we of course gave a nod to the guy on the cover of "Death Shall Rise". I guess we have had mixed thoughts on the art, that’s better than no opinion. I remember lots of people hating the "To The Gory End" art, ha ha."

How did you get the deal with Peaceville? Is it only for one album or does it include the option of releasing other titles? For example, I think that your old catalogue would deserve being reissued, because your first three albums are pretty hard to find.
"Peaceville got in touch with us, I think they heard that we were putting material together. We sent them a couple of tracks and the deal was done. We really weren’t looking for anything at that point, so it was nice. Yeah, we have the option of another album, and we are looking into re-releases."

“Shadow Gripped” represents a perfect and coherent heir of your masterpieces “To The Gory End” and “Death Shall Rise”; I would also mention “The Sins Of Mankind” that is a very solid Death / Thrash Metal album. If you wanted to blow away “Black Faith” and “Spirit In Flames”, I think that you’ve reached the target. When did you decide to resurrect the band and which was your primary aim?
"We got back together to do a few festivals to promote the re-release of the first three albums in 2014, no aim really, just to play a few shows, to see how it went. It’s just happened organically, really no aim of world domination."

Coming back to your early days, the band was born in 1987, released two demos and then signed a deal with Vinyl Solution for your debut album. “To The Gory End” was mixed by Scott Burns and saw the guest appearance of John Tardy. Any interesting anecdotes about that recording session to share with our readers?
"We had a very small budget, so we spent the least amount possible on food and the maximum on beer, beer was very important in the recording process."

The cover artwork of “To The Gory End” – one of the best ones in the history of extreme Metal – was censored in some countries, right? What did happen in detail?
"The only place I know it was banned was in Germany! A government letter was sent to the label saying they thought it would corrupt the youth of Germany and for that reason it had to be withdrawn and re-released with a different cover!!! Back of the net." 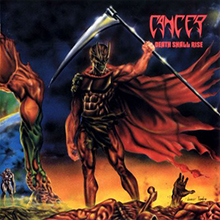 That killer drawing is based on a scene from “Dawn Of The Dead” by George A. Romero. I’ve also read somewhere that the lyrics of ‘Into The Acid’ were inspired by the infamous acid scene from “Robocop”: great choice! Any other CANCER song influenced by horror and gory flicks? Can you list some of your favourite horror movies?
"So, the title track ‘To The Gory End’ was inspired by Hell Raiser, ‘Bodycount’ by the Friday the thirteenth films. They are the only other I can think of. As for horror / gore movies that we liked… too many to mention, but all the ones that are seen as classics now."

In 1991 a new release: “Death Shall Rise”, this time an album entirely recorded and mixed at the Morrisound Recording Studio. Any memories you would like to share with our readers? Glen Benton sang on ‘Hung, Drawn And Quartered’, who did come up with the idea of this guest appearance? What was it like working with Scott Burns? Leaving aside the typical and quite tedious questions about James Murphy, tell us something about the Floridian scene in those days.
"Well, we had already done some shows with Glen so he popped by the studio with some fire crackers that we set off in the garden and then he did the backing for ‘Hung, Drawn And Quartered’. It was all good fun, nothing seemed to be ever planned, it just happened, same with James. Same with "Shadow Gripped"." 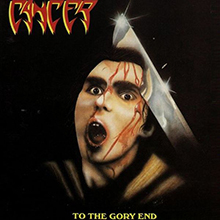 The ‘Back From The Dead’ music video is one of my favourites ever. Some killer movies come to mind: “Deranged”, “Buio Omega” and “Reanimator”, just to name a few. It’s sick and morbid: a visual blood feast. When and where was it filmed? Any additional information about this killer video is more than welcome, thanks.
"So we knew of a guy who lived quite close to us who was a writer and film maker, he was into gore too. His name was Paul Hart Wilden. He now works in Hollywood writing for Netflix and producing shows and film. Funny how things work out. We all had those films you mentioned in mind when we made it. Everyone seemed to be doing the same thing video wise then, so we did it different, like how we always have."

I really like your drumming style: solid, accurate and dynamic. How old were you when you started playing? Are you self-taught or have you studied music? How have your drumming techniques changed during your 30 years long career? Who are some of your main drumming influences today and back when you first started?

"Wow a drumming question! So I started when I was 10 years old, my first band was a Punk band called HOT SHIT, we split up after the drama teacher at school changed the name on the poster for our first gig to HOT POO!!! So I have been playing for 42 years, I was completely self taught until about 2001 when I studied in London for a year or so. I play all kinds of music not just Death Metal, I have played in THE GROUNDHOGS and a group called CURRENT 93 plus many many more. I feel my style is my own and add lots things from other styles in my playing. I think my drumming was most influenced by Bill Ward, Ian Paice, John Bonham, Paul Cook, Stevie Wonder, Billy Cobham and Filthy Animal Tailor. I’m sure there are more. Today I’m more influenced by rhythms than actual players but always feel inspired when I hear a good drummer, there is something primal about it."

Do you have other musical projects in addition to CANCER? Which are your future plans: gigs, tours, big festivals?
"I have nothing other than CANCER going on at the moment, the band has some shows next year in Canada, Germany and other possible in Russia and Israel. Hopefully more coming. Cheers Carl."