At their first date of their tour with PRIMAL FEAR and SACRED STEEL I had the chance to talk to Alexi Laiho (21), guitarist, singer and songwriter of CHILDREN OF BODOM. A killer package but also a bit problematic: not every Metalhead tried to be open minded. The interview had to take place after their set so I missed PRIMAL FEAR, but I guess it was worth it. Alexi was quite a bit exhausted due to their energetic show, but patiently he tried to answer my questions very openly. As there have been many interviews with CHILDREN OF BODOM recently, there was no point in talking about the new album "Follow the Reaper". So what we basically did was a bit digging in the past plus a little thinking about the future. Unfortunately I made a mistake with my tape so I have to try to recall the first couple of words from my memories. My first question was concerning Alexi’s Heavy Metal past, how he got hooked to Metal, his first album, his first concert and such. It’s his sister’s "fault": she was listening to Metal and so Alexi already became a fan when he was 6 or 7 years old. It started with more traditional stuff like SKID ROW or BLACK SABBATH. Here I sensed that my tape wasn’t recording, so from now on you’ve got the original…


"…then I got even more extreme like this Death Metal phase I got into, a lot of Death like ENTOMBED and OBITUARY, then I got into Black Metal and here I am now, basically. I remember my first Heavy Metal record was the first WASP album, still one of my favorite albums. First Heavy Metal concert wasn’t until… let me think… I mean I saw small bands like AMORPHIS but the first major Metal concert was METALLICA in ’92. I saw ’em actually twice the same year."

How and when did you develop this unique CHILDREN OF BODOM style? Was it in the rehearsal room, did you have an idea like: hey, let’s combine STRATOVARIUS with more extreme Metal? Is there a point in time from which on you were the CHILDREN OF BODOM we have nowadays?
"It’s something I can’t really say when I developed the whole thing, or when we did, but you know, it’s more like that it has been really developing in this direction for a period of many years, and just because of the way I… or the stuff I’m really into, because I’m really into 80s Heavy Metal bands and then I’m also into these extreme bands, you know. So I guess it’s just natural the way I come up with riffs and which are combined 80’s Heavy Metal and extreme stuff, but it was never really planned but that’s just how it turned out." 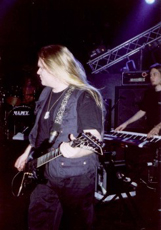 What can people expect from CHILDREN OF BODOM live, I’d say it’s more a Rock’n’Roll kind of attitude than, for example, SACRED STEEL? (I like them, though)
"Yeah, it’s more concentrating on the actual band, you know, yeah, like you said, it’s more Rock’n’Roll, the main thing is not the fancy lights or the pyro techniques or the fuckin’ spectacular back drops or whatever, it’s just the band, it’s just a lot of headbanging shit and just aggressive stuff going on. You’re not gonna see any fire or anything like that but you’re gonna see a Heavy Metal band, the one thing is that we’re not fake, we don’t really plan what we do live, like now we’re gonna do this with our guitars and now we’re gonna draw our sword and swing it a couple of times and then put it back, it’s nothing like that, everything we do is really spontaneous."

So do you sometimes change your set list?
"Of course we sometimes change it, sometimes we change it accidentally, like tonight, for example. We just did this touring in Finland and the set list was a little bit different than it is right now. And then, you know, we’re gonna go to Japan next time it’s gonna be different, you know. Same songs basically but in a different order."

Espoo, the place you come from in Finland: are there any extreme underground bands that deserve to be signed?
"Basically, Espoo is like a suburb of Helsinki – that area there is a lot of Metal bands like all around of Finland, but it’s not only the Espoo / Helsinki area, just all around the place, there are bands coming from all over Finland."

Any names?
"Ooohhh… I know that there are bands but I just can’t think of any names right now. I mean I know that there is a band called DECAYED which is gonna get signed with Spinefarm. I think that they have potential to actually be something, you know, I heard a lot of names but just can’t remember them."

Okay, let’s leave it at that. Do you have any hobbies apart from music?
"No, not really – I don’t really have any hobbies, I don’t have time for that shit – but – except for music – I’m really into cars, for example. I like cars, I like driving, fast of course, and also fixing cars and shit like that. That’s one thing. But I mean the thing is that I really don’t have time for that, either."

Can you imagine a life after CHILDREN OF BODOM? Can you imagine to stop CHILDREN OF BODOM one day?
"It’s not gonna be for any other reason – cause nothing’s gonna get in our way unless it’s inside the band or concerning the success of the band. We all know that if somebody’s gonna leave the band we just don’t wanna continue, cause this is CHILDREN OF BODOM and we don’t wanna get anybody else in the band – and another thing is that when we see that success is gonna go down just a little bit then, you know, we know that that is the right moment to stop. Cause it’s so sad just to, you know, I don’t wanna say any names but some bands used to be really fuckin’ huge and then eventually, of course nothing’s gonna last forever, you know, eventually success is gonna go down and if we just keep doing albums all the time and eventually people just remember: "yeah, it’s this band and they’re still doing albums all the time" – but we don’t wanna do that shit! When we see that it’s gonna go down we’ll stop. I think it’s gonna happen… at the latest it’s gonna happen after the fourth album. Right now, the 3rd album "Follow The Reaper" sells better than ever so now we ain’t got any reason to stop but I think that if we’re gonna do a 4th album I think that’s probably gonna be the last album we’re gonna do. And after that there is one thing in which… I like these guys, I mean they’re the best friends, probably the only friends I ever got and it’s like really good chemistry going on and it’s better that when we’re still something and when we sense it’s going down: just stop so we’re gonna have good memories of the whole thing, you know. And then just going on and put another band together, you know, probably I’m not gonna sing any more, you know, I’ll start the whole thing all over again."

Famous last words?
"Well, I guess you’ve heard that like a million times already, don’t know what to say, just… but you know I always mean it when I say it: just a big thank you to all my fans, we respect our fans more than anybody in the whole world. That’s it."