Ever since the resurrection of VOICES FROM THE DARKSIDE the Black Metal contents unfortunately was almost non existing… This certainly didn’t happen on purpose or anything and we will definitely continue to feature a lot more bands of that genre in the future as well, as long as we consider them worthy enough.


So, when Rick Cortez of L.A.’s mighty SADISTIC INTENT offered us an interview with DARKTHRONE’s Fenriz, we obviously didn’t hesitate for a second! DARKTHRONE is without a doubt one of the most important (if not THE most important) Black Metal acts ever and a good way to kick things off in this department… 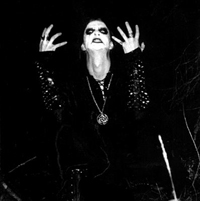 What are your first memories of Metal and what are the first groups that inspired you to play Death / Black Metal?
"Okay, my first memories of Metal, I got the URIAH HEEP "Sweet Freedom" album for like my very first birthday. I was basically into the whole heavy shit from the beginning. When I was a kid I didn’t really listen to much children’s music because I got all this Rock, GRAND FUNK, THE DOORS and shit from one of my uncles. And then I got to know as far as AC/DC with Bon Scott, IRON MAIDEN, METALLICA and SLAYER as well. I first discovered them in the end of ’85, I don’t know it was a long way back. So I was thinking better listen to that shit, it’s for me! But when it comes to Black Metal, I really didn’t understand the whole darkness of it, I bought like BATHORY in ’86 and shit but I really didn’t get it until I heard this one song of TORMENTOR from Hungary on a compilation tape in ’89. That’s when I like started listening to older DESTRUCTION, KREATOR and shit again, all that darker stuff."

How did you meet Nocturno Culto and what year did DARKTHRONE come to exist?
"Well, it was basically because I wanted to take my project a little more seriously so about in the Autumn, yeah, that’s like ’87 around that time of year I was thinking why not take this a little more serious you know. Then I met up with Nocturno Culto through a friend, a friend studying for guitar. We had the line-up we had on "Soulside Journey" and shit, that was early ’88, that was hard but that was really when it started. We started the whole DARKTHRONE thing making songs in ’87 but Nocturno Culto didn’t join until early ’88."

How do you feel about your debut "Soulside Journey" today?
"You know, I have a strong connection with that because it’s the first album and you tend to listen to that album a lot. The first album is sort of the thing even though if you hate it after it’s recorded and everything you always come back to that. It’s different from all the others but it’s easy for me to like it now but I had to dis-own it for a couple years because I was trying to make a point with all the Black Metal shit. So I had to go total Black Metal or bust you know, Ha! Ha!"

On "A Blaze In The Northern Sky" you thanked the slain Black / Death Metal legend Euronymous, would you say he played a role on your musical direction as far as the Black Metal thing goes?
"I think he played a role throughout supporting the darker bands all the way as far as dealing with the underground, and had more of an interest on us that a lot of other people. I think it was great to have him there like sort of an anchor you know. He was a fuckin’ anchor."

Was Euronymous’ record shop "Helvete" a meeting ground for the Norwegian Black Metal scene? If so, who were some of the people that hung out there?
"It was a meeting ground for people from ENSLAVED, EMPEROR, THORNS, THOUGH SHALT SUFFER, Count Grishnacht. We met around there but we were no more than like 15 people or something like that. His shop started out in August ’91 and it was basically closed Christmas time ’92, so it just existed for one and a half years." 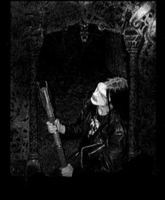 What do you think about the "Lords Of Chaos" book?
"Fuck that book man! I think it’s just like a hype, I have no further comment because I haven’t really read it."

On "Panzerfaust" I noticed you thanked EXODUS for creating "Bonded By Blood". Any other American bands you find significant as well? 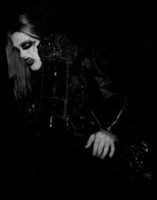 "Of course, I got my bag full of what I’m going to play tomorrow at Manchester (England). So we could say DARK ANGEL "Darkness Descends" album is one of my faves. Also SLAYER. I am wearing a POSSESSED shirt right now! I had to pick that up in ’92 because it was impossible to get that over here in Oslo. So I just mail ordered like 10 copies and the last one I gave to Bard Faust now because he was out on parole. So of course, it’s just that my head is clogged up now."

What was your reaction when you found out that Phil Anselmo likes DARKTHRONE?
"Well, I was thinking, oh no, now maybe DARKTHRONE is gonna be the band that Phil likes instead of being DARKTHRONE. Apart from that, I was disappointed a little bit, I didn’t know him so I really couldn’t comment on it. Now that I know him, I’m really impressed by the man." 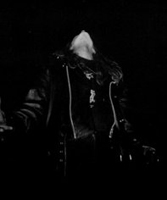 I agree, look at the "big" Metal scene, not even SLAYER supports Death / Black Metal one bit and PANTERA has already took bands like SATYRICON and MORBID ANGEL on tour! However, there are still some Black Metal people who say it is not right for you or Satyr to work with Phil Anselmo, what do you think?
"Hey yeah well you know, when you first get into Black Metal you’re supposed to be really fanatical you know, it’s supposed to be obscure and after that it’s only natural you sort of release a bit. When we first started the Norwegian Black Metal thing it was meant as a statement and we had to do that at the time. I think it should basically be this form of fanaticalness in any type of music but after a while you chill out a little bit. Anyway, the envy of losers we piss on!"

I couldn’t have said it better myself! So how are things coming along with EIBON?
"You know, it’s difficult for us to get together and shit because the distance is huge and everyone is in different groups. We have like four or five songs and we’re just doing three more then we have an album, and it’s gonna be fuckin’ tuff!" 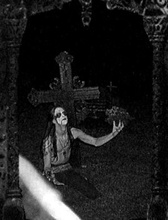 Any plans for another NEPTUNE TOWERS release?
"Fuck no, I have no plans for that. I ain’t got no plans for almost anything. We’re working on the new DARKTHRONE album now."

I’ve heard about the "Elm Street" club, could you tell us a little more about it?
"Hmm, it’s something in particular, people that come here tend to be very disappointed. They think it’s just like BATHORY beats all the time but that is not the case. The case is we come here to sit and hang along with others, other people, Rock’n’Roll people. It’s pretty mellow, but the thing is that, it’s cool that there’s places that have Grind bars and shit like that but, to sit and listen to Grindcore at a pub. You just come here to talk so basically what goes best in a pub is music that’s really simple like old AC/DC. For Thrash Metal, instead of playing CORONER I would first play METALLICA because if you come here and listen to some CORONER, you got to listen or you gotta, you can’t just even talk and you know take CORONER at the same time. It’s really hard in a pub like this. So it’s really nothing to tell, it’s really a regular Rock’n’Roll place."

Out of curiosity, what have you heard of Los Angeles if anything as far as the Metal scene is concerned?
"For years I’ve known about SLAYER, DARK ANGEL, TERRORIZER and SADISTIC INTENT. I’ve been listening to "Resurrection" (SADISTIC INTENT), it’s great man, total 80’s!" 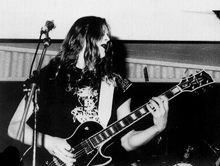 Obviously , today DARKTHRONE is known as a Black Metal band and that stylistic title or approach essentially goes hand in hand with Satanism. With that in mind, people have different interpretations behind the semantics of Satanism. Would you say your philosophy of this is more of a metaphor of your reality or is it something you literally believe in out of the Holy Bible?
"To answer that question, basically I think DARKTHRONE is about a grim aesthetic appeal. That’s what I’ve been realizing all through these years that we’re just trying to do things within the realm that we have created within the project. So it’s like a fuckin’ painting, we want to do the same thing that’s within the DARKTHRONE aesthetics made."

Do you have any new material ready for the next DARKTHRONE release and will it be in the same vein as "Ravishing Grimness"?
"Yeah, it’s still DARKTHRONE. We got a couple of songs now. The most important thing for me is to have the lyrics ready and also for us is to have some sort of idea of what the cover should be like. The music will basically be DARKTHRONE. We’re not gonna make something other than what we’ve been doing before. I think it’s gonna be called "Corporal Punishment"." 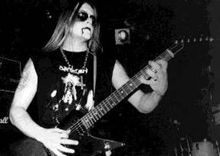 Have you ever made a video or think of making a video for DARKTHRONE?
"We made this one because we had access to a studio to record a song but that was in ’89 or ’90, it’s just crap anyway. It was not for official release, it was just for some students of Norwegian Television who had to do a project."

I know you do not like playing live, but if a promoter guaranteed DARKTHRONE at least 100 diehard fans at a venue with a good PA system, stage, etc. would you consider doing it?
"Even if JR from Dallas was doing backing vocals we wouldn’t play live man, because Larry Hagman is the evil one!"