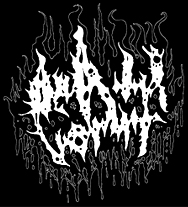 The Chilenean underground Metal Scene has delivered some fine tunes over the last 20 years and similar to Germany, the scene with bands like UNAUSSPRECHLICHEN KULTEN, PENTAGRAM CHILE, DEMONIC RAGE or DEATH VOMIT seems to be more active than ever. The last mentioned protagonists are spreading out their raw vision of unholy Death Metal over us and their fine debut album "Gutted By Horrors" was reason enough for us to hook up with drummer Evil Ezcorzized to bring some light into this rotten tomb.


Hey Rodrigo, how are you doing? Thanks for taking the time to answer a bunch of questions for our readers…
"Greetings Michael, Okay! Rodrigo over here (Evil Ezcorzized), thanks for the invitation to Voices!!!!!!! A pleasure to be part of DEATH VOMIT the Horror!" 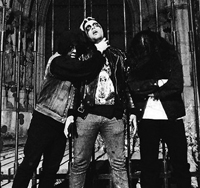 DEATH VOMIT was founded in 2011. Tell us a bit, how you came together and who had the idea to form a band and play Death Metal…
"Well, DEATH VOMIT was founded in Curico, Chile back in 2011. The original members were Azazzel (Francisco – guitar / vocals) and Rodrigo (Evil Ezcorzized – drums), and the band was initially a project for a zine which did not bear any fruits. Later on, we intended to form a real band as we shared the same taste for Death Metal! We started only with cover tunes and after some time of rehearsing, own themes were generated in line with MEGASLAUGHTER, CANCER, MORGOTH, CIANIDE, PESTILENCE, ASPHYX, CREMATORY (SWE) and other plagues of Death Metal from Scandinavia and America. In 2012 we released our first demo tape called "Infestation" which contained 5 tracks (including intro), where the last item was another version of ‘Infestation’, which is sung by Count Czar Yang (AMMIT). This occurred because Tom Evil Hill months earlier had joined the ranks of that band and Count Czar Yang as the singer of AMMIT became interested in our band and we proposed him the vocal duties. In the meantime, Tom Evil Hill left the band and after this, the great guitarist Vesalius (Sebastian Salce) from UTTERTOMB / COMMUNION became an active member of DEATH VOMIT. This participation finally led into a split tape called "Coagulation Of Pest", which was released in 2013 on tape format and later on this split was also released on CD via the label Veins Of Full Wrath, limited to 500 copies. That same year in January, we were signed to Xtreem Music from Spain. After hearing our first demo, they were interested in signing us, giving way to a record deal for the first 2 albums to be released by the band. In 2014, on July 1, our long lasting "Gutted By Horrors" officially was released in CD format and gets a vinyl treatment on 12 " now in December."

What were your influences back in the early band days, as your sound seems to be pretty influenced by old school Swedish Death Metal of the 90s…

"As I mentioned earlier, we are heavily influenced by Scandinavian Death Metal like DARKTHRONE ("Soulside Journey"), CARBONIZED ("Au-To-Dafe"), MEGASLAUGHTER ("Calls From The Beyond"), EPITAPH ("Disorientation" demo), EXCRUCIATE, CANCER (old), TREBLINKA, MORBID ANGEL (old), CARNAGE, PESTILENCE (old), ASPHYX, MORTA SKULD, TERRORIZER among a lot others. There are also new bands that we like a lot: SWALLOWED, OBLITERATION, SKELETHAL, MORBUS CHRON, BASTARD PRIEST, DEATH BREATH, LANTERN, MAVETH, VENENUM, NECROS CHRISTOS etc. We like this simple line, no complex Metal, not fancy at all, just simple and bestial! But not too technical, just playing possessing Metal contents. We are more likely to demonstrate atmosphere. Delivering essence and our ideology, as our band is more focused on the horrors! Death as a concept, the ascension and death record of man, we focus also on the literature of Lovecraft, among other writers of similar contents." 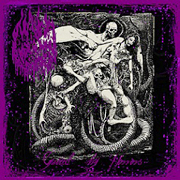 "Gutted By Horrors" received some very well critics in the underground and marks a huge step forward. The songwriting is brilliant but still pure underground. Did the songwriting come naturally or do you write intentional old school? For me it sounds so blithe as you do not care at all if people like the music or not…
"We are quite satisfied with the reception of "Gutted By Horrors". We had confidence that it would be like this but objectively speaking, we do this type of Metal because we like it. Our intention is not that at all people like it, because it is practically impossible due to musical diversity, but the particular style of DEATH VOMIT is directly coming from the influences of the single members, as we empty our tastes to create the band, which is why that line has formed the sound of DEATH VOMIT. However as you are grateful mentioning the support of real bangers from outside our country in Europe, South and North America, this is our principal engine to keep doing more Metal like this. It is our essence and we packed all together to what we do, the lyrics and the melodies are directly related to the maximum horror!"

Are you happy with the cooperation with Xtreem Music so far?
"Dave Rotten has been pretty serious with us, everything has been properly discussed in advance and there have been no problems so far. We are pleased to have reached this contract. The truth is, that we contacted many labels, but all gave negative responses, and here in our country many people were not interested in us, that’s funny right?"

Do you have a stable line-up now, to play some live gigs as well and what are your future plans with the band?
"Accurate, our line-up is now consolidated. For now we are recruiting a new bassist, as the rest of the band finds it necessary for live performances. By now we have had good acceptance. In vivo, there have been some difficulties of events, but non have been obstacles for us. We have plans to go abroad to ravage. Hopefully we will be the opportunity to do so. We are now in the launching of preparing our second album and another demo, which will be released via Xtreem Music , so more material is coming from our side. For now we are very pleased by the progress of the band and we will continue to stand for what we have achieved so far."

Any last words to the Voices readers?
"Well, thank you very much to you and the magazine for giving us the space and for allowing us to present our Metal. Voices readers can purchase the LP directly from Xtreem Music, or email us by writing to: Deathvomitband@gmail.com And if you want to hear the material before, visit our bandcamp site: Deathvomit.bandcamp.com We hope to come to the European foreign land soon to show you, how the Metal is in South America!!!! Horror!!!!!!