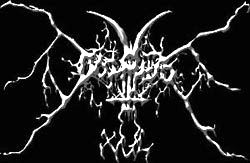 This interview with Chile’s sadly defunct outfit DOMINUS XUL turned out to be one of the most complicated I ever did. First of all it was already kinda difficult to track down a former member of this blasphemous and extremely brutal Death Metal act. Then – when I was finally in contact with their drummer Alvaro Sequeida (who’s in MELEKTAUS nowadays – see reviews for further info) – the contact slowly but surely started to fade away again… A couple of times he still asked me to resend the interview questions, claiming that he never received them. But when he finally confirmed that he got them, nothing happened anymore… I had to remind him again and again to answer those questions, but his excuse always was that they still needed to be translated… Well, to cut the crap – that, for one reason or another, never happened ’til this very day and I was beginning to realize that this interview probably would never become reality, unfortunately. Exactly around that time (thanx to Thomas of Germany’s Necromaniac zine), I got the information that another old band member used to be part of THORNAFIRE, so I contacted those guys and finally was in touch with the old DOMINUS XUL guitarist Alejandro Lizana, who gladly accepted my interview request. But when he recently returned the interview, I had to face another quite serious problem. Being from Chile, his English was rather poor and so his answers often didn’t really make any sense to me at all. So I went through them, corrected as much as I could, erased several lines and then returned the whole text to Alejandro in order not to publish anything wrong… The final result is not necessarily the planned very in-depth feature, but from my point of view still worth being published for the simple fact that you hardly read anything about DOMINUS XUL at all. So, I hope you will enjoy it nevertheless…


Alejandro, could you first of all tell us a bit more about DOMINUS XUL, like when the band got together, if any members had been involved in other bands previously, if the band recorded / released any demos before the album and so on?!
"As far as I remember DOMINUS XUL got together back in the early 90’s. In ’93 / ’94 the debut demo "The Occult Lords Of Torment" was released through Toxic Records (it also got distributed in Spain by Repulse) followed by a promo called “KUR“ (in ’95), and the EP "Unchaining The Black Profesias" (on Deifer Records) in ’96 / ’97. It’s already long time ago, so I’m not exactly sure about the dates, sorry."

How did you get together with Picoroco Records for the release of “The Primigeni Xul”? Was the album already recorded by the time they approached you or did they finance the whole recordings and everything?
"Well, like everywhere else in the world, the bands in South America are also in need of someone who invests some money in your material in order to achieve a better quality and to manufacture it abroad since that is of better quality than in our country. The band runs into recording expenses which costs a lot of money in Chile… So, most of the Chilean bands just pay for the recordings and then someone else takes over the manufacturing and distribution of the CD’s."

I noticed that only vocalist Danny Grave and bass player Francisco Cornejo have a thanx list in the album (so I suppose that they are also the two guys on the picture right behind the CD)… Was the original line-up of DOMINUS XUL already falling apart by the time the album was about to be released?
"DOMINUS XUL was basically Danny and myself. I composed 100% of DOMINUS XUL’s music and Danny took care of the lyrics. The reason that I wasn’t credited for that were problems between Danny and myself. I am a very strong minded person, with respect to the other members involved in DOMINUS XUL, who were all of smaller bands out of the city of Santiago De Chile." 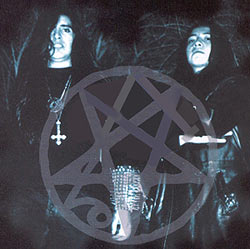 What actually caused Danny Grave’s death and was that also the main reason why the band didn’t continue under the DOMINUS XUL moniker?
"Danny Grave died about a year after I had left DOMINUS XUL. They were just preparing their album, but after Danny had died DOMINUS XUL’s career fell apart since the other members didn’t really participate in the history of the band…"

Judging the band just from the songtitles I suppose that you take the lyrical side very seriously. Tell us a bit more about the whole concept and where you mainly draw your inspirations from. I guess the “Necronomicon” plays a big part in that direction, doesn’t it?
"Yes, it’s true – there is a strong inspiration from various things – occultism and dead languages included. Since it was Danny who wrote the lyrics and I in particular didn’t have any bigger participation in them (since we had different points of view) I can’t really tell you more about them, sorry."

Musically you come pretty close to what INCANTATION did on their early releases… So, is INCANTATION a big influence for you? Which other bands were responsible for the sound of DOMINUS XUL?
"Yeah, for me (since I was the creator of the musical part of the band), they have always been a really strong band!! In particular I was influenced a lot by incantation, Immolation and carcass. They were very important to me in terms of brutality, darkness and some technique. But I never intended to copy them. I personally don’t like bands that use a lot of technical equipment in the studio so that people don’t recognize their bad playing abilities. To me that has almost become a fashion… But it usually gets reflected in their live presentation. But that doesn’t mean that I am totally against technology. It’s just that it should not be overused."

You are located in Chile and I suppose it’s very difficult for you to build the foundation for an international career there. So how did you try to get the word out that DOMINUS XUL was a band worth to be checked out by international standards?
"It is undoubtedly quite difficult to work in Chile as well as in many other countries of South America. You won’t really manage to build a career here, as you can’t concentrate 100% on music only. That doesn’t mean that everyone wants to become a millionaire! It’s just that in Chile it is almost impossible to be devoted 100% to the music… Living in a half poor continent and not having strong Metal support is very difficult. Because of that the majority of bands try to build their career in the old continent or in North America… I am glad that our followers and the magazines have treated us very well and on behalf of my old band I thank them!!!!! That keeps us motivated to continue on and to write more good music for our fans."

How about live shows? Is there a good underground scene for this kinda music? I mean, are there enough clubs where you can play and do show enough people up at the shows? Which other bands have you already shared the stage with?
"Yes, there are enough places to play and the overall quality of the bands is very good here in Chile! But I personally don’t like to play in those places…"

At which point of time did DOMINUS XUL fall apart and what actually lead to the two new outfits that rose out of the ashes: MELEKTAUS and THORNAFIRE? Were any musical or personal differences responsible for the separation?
"I’m glad you ask me that, cause this gives me the opportunity to clarify the truth… I was also in MELEKTAUS for a while, but since I had a personal problem with the guitarist and one of the old members, I split up with them. Regarding THORNAFIRE – this band doesn’t have anything to do with DOMINUS XUL at all. I was just a session member for a while. But I have a new Black Metal project together with DOMINUS XUL’s Andrés now which is called ETHEREAL HIMNA."

Have you ever checked out the MELEKTAUS promo? What’s your opinion about the material?
"Extremely good! But honestly spoken, it is too extreme for my taste. They certainly have a very good future since they are excellent musicians and very good guys. I wish them all the best with their new career." 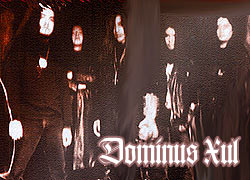 Tell us a bit about your new band THORNAFIRE, like who else is with you in the band, what kind of releases you have put out so far and how you would describe the musical style (is it any close to what DOMINUS XUL stood for?)…
"THORNAFIRE is not my band. Due to personal problems I wasn’t able to play for a year. But I have two new projects going now. ETERNAL DISGRACE (Death Metal in the vein of IMMOLATION), with whom I have just recorded a promotional demo. It was produced by Claudio Torres, who’s not only my sound engineer, but also my manager… And as I already mentioned, my other project is called ETHEREAL HIMNA (Black Metal). We are in the middle of recording material for an EP. In this project I am also working with Andrés, the former drummer of DOMINUS XUL."

Ok, Alejandro – I’m running out of questions – if there’s anything else you’d like to mention, feel free to do so now. Thanx for the interview!
"It’s been great talking about all this and I really have to thank you for the opportunity. It is the first time that I was interviewed by someone from your country. I enjoyed it a lot! Thanx for giving me the space to be part of youe magazine. For my new band I am in search of some producer."