Usually this was supposed to be an interview, featuring the entire EXUMER history from the viewpoint of former guitar player Bernie Siedler. But even though he agreed on doing it, he unfortunately never returned his interview answers to us until now… Luckily Paul Arakaki, who used to be the band’s frontman / bassplayer on EXUMER’s second album "Rising From The Sea", also got our questionaire, so that we at least can publish a little bit of additional information to the EXUMER / Mem von Stein feature done by Timothy Dovgy a while ago. Due to the fact that the following questions / answers were originally supposed to part of a way bigger feature, they partly may sound a bit out of the context, but I guess that shouldn’t prevent us from still using them anyway, right? 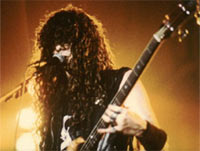 EXUMER was basically put together way back in mid 1985 by Mem (on bass and vocals) and Ray (on guitar)… But what most people are probably not necessarily aware of is the fact that you were already in the first incarnation of the band (still playing guitars though)… For how long have you been a member at the time and why did it not work out in the beginning?
"Well, really I had to leave the first time because I was totally screwing up in school. I was like a junior in high school at the time and Metal was just way more important than anything else. Every second of every day was all about Metal and playing guitar! So, I had to get my shit together and concentrate on school, bummer. I can’t really remember how long I was in the band before having to leave? But, having that first taste of playing Metal loud as shit with a bunch of your friends sealed the deal for me. I knew this was what I was going to do for the rest of my life. And it was quite clear that the rest of the guys flet just a passionate about playing." 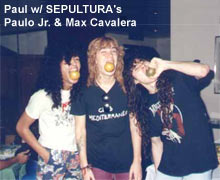 What have you musically been doing previously? Have you been playing in any bands before?
"Well, after leaving EXUMER I went back to California and attended Musicians Institue (G.I.T., Guitar Institue of Technology) in Hollywood and started looking for other dudes to put together a new Metal project. Eventually I put together a band called 999SOCIETY. We put a demo out and did a bunch of gigs around Southern California but, that was about it for that project."

Wasn’t it quite difficult for you to rehearse really effectively then, as you were all pretty much living in different cities at the time? I mean, you were all still very young and probably not able to move to Wiesbaden where Mem was located. So, how did you solve this problem?
"Ah, from what I can remember it really was no problem. Me and Ray lived close to Wiesbaden, so he would pick me up at my house. And, I think Syke lived in Wiesbaden or fairly close. When I started playing with EXUMER again we had a different practice place in Wiesbaden and it was business as usual, Ray would come and grab me at my place, shit at the time I didn’t have a drivers licence! Ha!" 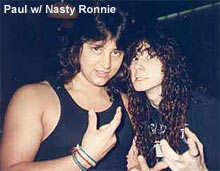 For some reason the "Rising From The Sea" album didn’t get the same overall positive feedback as your debut, even though it sounded a lot more "international" due to your Araya like vocal delivery… What do you think was the reason for the rather mixed critics?
"Well not quite sure, I seem to remember most of the reviews being positive. If anything they didn’t seem to like the overall sound production."

In July 1987 you got the opportunity to do your first real tour of Germany as the support of the SUICIDAL TENDENCIES… Do you think it helped to increase the band’s popularity in any way? I mean, you probably didn’t really play to a Thrash Metal crowd, so… 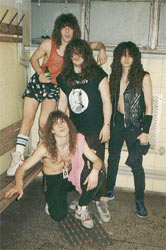 "Hell yes it helped the popularity out! The Metal / Punk crossover thing was totally happening at the time. And at all the shows you would see a mixed crowd of Metal / Punk fans. So, it was totally cool. Playing with SUICIDAL was awesome. We were all SUICIDAL fans beforehand anyway, so doing the tour was amazing. And we got to play a show in Mainz, which is right next to Wiesbaden. Nothing like playing a home turf gig!"

At least you got a TV feature on Germany’s "Mosh TV" with a couple of live songs, right? How did you feel about that?
"Ah man! It was cool being on TV and getting the exposure and everyting, but their (the TV dudes) choice of songs wasn’t the best to air. That song that aired was a very early version of ‘Are You Deaf’. And, it just wasn’t refined enough to be on air. It turned out latter to be a killer tune though!"

Next up was your tour with NASTY SAVAGE and ATOMKRAFT – what kind of memories do you have on that one?
"Ah, that was brutal at times! But, we all had so much fun. All the bands had a great time, it was Metal all day every day, hell yes!! Getting to see different countries and all the crazy Metal heads everywhere was killer! I will never forget this show we played in Poland. It was an all day / night long Metal festival in this huge stadium! Just packed with thousands of Metal heads, so killer!"

Besides the original CD releases of both of your albums (which are really hard to find these days and therefore extremely expensive!), there’s also the High Vaultage re-issues (that also feature the demos) and a rather obscure 2 on 1 disc from Brazil… Would you like to comment on that?
"Well, it’s a bummer that the old stuff is so expensive. And I’m totally stoked the re-issues came out on High Vaultage. I think they (High Vaultage) did a great job on the CD’s. Inside the re-issue booklet is a killer interview with Ray and there is a lot of cool pictures too! Plus the songs have been remastered and they sound huge!"

Anything else you’d like to add here?
"Well, I totally stoked that people still dig EXUMER and oldschool Metal. EXUMER and crew are some of the coolest people ever, and I’m glad to have been a part of that. It is something that I will never forget. And not a day goes by that I think about doing it all again."