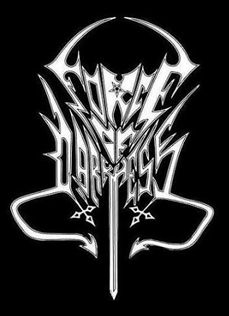 FORCE OF DARKNESS was created back in 2002 to raise the cult of obscurity and occultism in the city of Santiago in Chile, a country from South America that has spawned many bands since aeons. They started up with the release of a couple of rehearsal tapes and a live tape. After that, they released their killer self-titled debut album in 2006. Then after releasing a split in 2007, they unleashed their second album in 2010 "Darkness Revelation". This killer Death / Black / Thrash Metal band passed a bit unnoticed due to limited and hard to find releases mostly available in their native country, but that is changing as Hells Headbangers has re-released their last album on CD (and also in great vinyl format) and Iron Pegasus has also re-released their debut album on CD. They also have a new MLP released in the same killer style. To my ears they sound like the new century version of older SODOM, alongside many other influences. Add to that the fact of great musicianship and production values, and we have truly an underground jewel of darkness to be discovered. To find out more about this infernal force, we interviewed guitarist Seb Armageddon, so be prepared to feel the revelations of the dark… 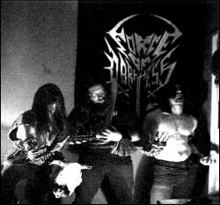 When and how was this monstrous horde that is FORCE OF DARKNESS summoned?
"FORCE OF DARKNESS was created in the year 2001 with the inspiration of doing Metal with a strong and personal feeling on what the darkness represented in those years to the band members. It was also about contributing to the dark energy surrounding the underground atmosphere, being influenced by the will of the three dark entities spawning the band, based on their ideology, experience and conviction at that time. A big journey would start around the path of darkness!"

How did you learn to play your instruments, how did you get (or steal) those instruments of torture? Did anyone took classes or was it just knowledge due to occult rituals?
"We learned to play them by self teaching. Obviously you’d get some useful tips from another demon from your circle, and as you gain knowledge you share and create meaning and purpose, and with that we started acquiring more experience. Also, based on our creations, we’d force ourselves to practice, until mastering those techniques and use them to create our final hymns of darkness." 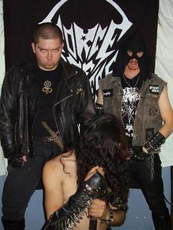 Although the name of the band is quite obvious, it is still very strong, besides what it means, is there any occult description to it? Who was responsible for such entity?
"At the time of forming the band, several concepts were discussed internally, according to what our energy would become and what band name would represent or enclose in the best way possible all the aspects of our ideology and music. FORCE OF DARKNESS was the name chosen for this. This name was spawned by Seb Armageddon."

The Chilean scene has been producing some of the most killer bands in the American continent, not only they do sound evil and aggressive, but also well produced and well executed. What do you think of this?
"Chile has grown and matured very significantly when it comes to Metal nowadays. Everyday you get to know lots of bands, which not only pose a strong attitude in terms of ideology and ornamentation but they also manifest very interesting musical compositions, which of course, lead to have a way of leaving that goes beyond and that is to be taken seriously. Another guessing would be associated to the fact that more information is available to the ears and minds of this world, so influences may vary a lot; one very interesting fact about our country these days is that in Metal, you will find interesting bands in the most important Metal genres, such as Black Metal, Heavy Metal, Death Metal, Speed Metal, Thrash Metal, Doom Metal, etc., which is hard to find in all the countries."

Your first demos have been recently re-released on vinyl, and they do show the evolution of the darkness. When you listen to them nowadays, what can you tell us of those past memories while creating music?
"Those dark hymns represent the path of evolution and embracing of the darkness. We will stop here for a while for developing a concept which in our belief will explain somehow these past memories and how the have and continue to affect us in our lives. From our perspective, the journey started with a lot of energy but in terms of the mind, one must pass the different stages or levels of wisdom, so basically you start being a neophyte as to understanding the hidden forces of the occult, and the raw energy you work with is rather simpler, aggressive, dark, but the control you hold on it is lesser than in different levels. Well, in time, as experience is gained, the entity absorbs more energy and the mind starts cultivating what will soon become the path you will follow with your essence. Today, we have acquired more wisdom based on experience, both individual and collective. However, those days energies are essential to us since they serve as the memorial on the band foundations, because our minds are still connected to that energy created in those years." 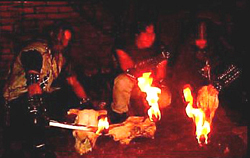 The debut album was released on the small but killer label Proselytism, in a giant digipak version, which seems to be sold out for ages, is there any idea for a re-press? And who did the killer artwork for this one?
"Yes, it was a great release!!! Very important to us, since it was our first album. It was released in 2006 by Proselytism in that 7” type format, which is an exclusive edition since back then we didn’t know of a label, which released those types of CDs. Anyways, a lot of time has passed since then, and we haven’t seen copies available from it. Answering the second question you asked, yes, it will be repressed soon, and also the vinyl version will be spawned. So, be aware of that dark force which will soon break loose!!!" (it has just been re-released via Iron Pegasus Records – Frank)

I can sense a lot of old SODOM in your music. Is this maybe a main influence or am I just too much into German beer. Tell me what you think?
"All the entities in the band are very fanatic of old SODOM, but it wouldn’t be a main influence for the band’s creations. For creating music we usually absorb the energies both voluntarily and involuntarily, and we combine them with our views and thoughts so that these can be materialized into a song of hymn for the band, but we don’t think of other bands or personal likes while doing so."

After a split EP you released a new album on another label. Why the change? I know it has be re-released on vinyl by Hells Headbangers, but what about a CD version?
"That album is our second album, called "Darkness Revelation", which although it relates to a darker view of our manifestation of the darkness, in terms of atmosphere and density, to say something, it also encloses very interesting concepts and views of a representation of the darkness and also a revelation for the magician, dark soul or entity behind that discovery, so it is quite a journey for sensitiveness and spirituality as well. We wouldn’t regard this as a change, since we were offered the idea to release the album by the other label (owned by 2 of our closest friends), so it was just sharing our will with theirs. But we don’t consider it to be a change, since even though the art and layout may seem a little different, the essence of the band didn’t change. Responding to your last question, the CD version will be released by Hells Headbangers Records as well."

People told me that live rituals in Chile are nothing like those in Europe. How do FORCE OF DARKNESS create atmosphere in a live situation? How many skulls are being crushed, what covers will you play to make contact with the dark one?
"Live rituals are always special in our country. There are no accurate words to describe it. Basically, you find everything here, from the quiet crowd to the most violent and crazy type. It’s a mixture of individuals, but it also depends on how the dark forces flow and how the rituals are conducted, in terms of putting the elements in the right order in order to create the desired effect. For the case of FORCE OF DARKNESS, the formula is simple. Just commute with the darkness, and let the dark entities inside us flow and influence. The rest is just chaos!!! We used to play some covers that are special to us, but nowadays we haven’t played any cover song since at least the last year. We have played hymns like ‘Hades’, ‘Tormentor’ (Hun), ‘Soldiers Of Hell’, just to name a few…"

Now, let’s talk about “Darkness Revelation”, this album is for me, more mature and more evil, but also has a better performance. It has a simpler cover art… what can you tell me all around?
"Darkness Revelation" was an intense album, not only due to its performance, but we also tried some variations regarding the first album, and what we were doing in terms of adding more elements to our music, which created a darker atmosphere along with its complexity. The art was a proposal made by Genuflection, which we reviewed and liked since it represented the concept we wanted to materialize (once we analyzed it with them)."

I see some of the members of the band are also active in some other hordes. How do you find time for doing so? And in this cases what is to be done not to make one band sound like the other and vice versa?
"The last part indicated is very hard, since it’s obvious that the new band will have some elements because you are behind it, but the idea is to analyze what the purpose of the new band is, and the rest is all about minor details. N-III is involved in HADES ARCHER, whereas Necrohell and Seb Armageddon are involved in AETHYR. Time is always a constant which today restricts the progress of a band in terms of creating music, writing lyrics, playing live rituals, etc., but we must put all our energies in order to bend that. In the end, our wills must prevail."

What things influence you music and lyrics? Bands, places, movies, books… things that will open the mind of mere mortals into the next step…
"We take influence from a lot of elements, both individually and collectively. Movies, books, rituals, Metal, magick, darkness, symbols, minds, souls, to name a few (not in order of importance), but at the time of creation, there the FORCE OF DARKNESS starts its work through us, its catalyzers. The rest is just too private to be put on words."

What are the future plans for thy darkness to take over earth?
"Future-to-be and current plans involve working on the new opus called “The Wrath Of Darkness”, which will be a split. That’s all we have to say for the moment. Thank you for this interview!!! HAIL TO THE DARKNESS!!!!"