The exception… this is the word that fits the most to a band like Gorgoroth. For many they’re the last keepers of the true gates of hell that have been opened with the rising of the purest Norwegian Black Metal style. For many people (once again) their latest opus "Incipit Satan" was a bit disapointing, being so far from masterpieces like "Pentagram", "Antichrist", "Under The Sign Of Hell" or even "Destroyer", though it’s still so direct and violent as well as musically than spiritually. Here is the interview I got from the current bass player King Ov Hell regarding their forthcoming album "Twilight O The Idols – In Conspiracy with Satan"…

First of all, we’re not going to waste our time with a biography that all may know these days, but tell us what happened since the release of "Incipit Satan" for Gorgoroth…
"Lots have happened. We’re now promoting our new full length "Twilight Of The Idols (In Conspiracy With Satan)". It was recorded at Shimmer recordings. We are satisfied with the outcome of the recording. Because of the circumstances (Gaahl was in jail and Tormentor left the band) we were forced to do it in our hometown Bergen. In the beginning it was only practical matters that needed such a solution, but after confronting Herb (participated on mixing "Incipit…") we started to believe that he could be the man for the job. So we went to his studio. We started the recordings May 02. But Gaahl was in prison and couldn’t do the vocals before January 03. So making this record has been a long working process and I’m of course satisfied with the result. Compared to "Incipit…" I would say we have tightened up the sound, but on the same time it has become more brutal and complete. The songwriting process has also changed very much on this album. On the first albums Infernus did all the songwriting. On “Destroyer” and “Incipit Satan”, Tormentor helped him out. On “Twilight Of The Idols” it is in fact me that has written most of the material. Kvitrafn, the drummer, has written two of the songs, ‘Procreating Satan’ and ‘Of Ice And Movement’ and Infernus the outro. Gaahl has of course total control over

the vocals. To this day I never rehearsed with him before entering the studio, mainly because he’s always in jail under the writing process. Therefore we heard the complete version of the songs first in the studio. And I must say I’m very satisfied with result. A cold record without mercy! The rest is my work. Next time it might be someone else who is doing the songwriting. I know Infernus and Kvitrafn are working on something for the next album already. I have actually written four new songs to the new untitled album that I’m very satisfied with. One of them was supposed to be the title track on “Twilight Of The Idols”, but it didn’t happen. As you know Gaahl spent over a year in prison. He’s actually behind bars again as we speak. But he’s going to be released in the beginning of August. This song is seven minutes long and in my opinion a classic. But because of the time pressure in the studio Gaahl was not able to do the vocals on it this time. But it is recorded and will hopefully be on our next release. It’s been three years since “Incipit Satan” and hopefully it won’t take three years to our next album. But you’ll never know. Gaahl is going to court again in October, so…. When we recorded “Incipit Satan” we missed the opportunity to use sound effects in a rational and functional way. When we entered the studio this time it was something we gave high priority. We wanted a raw distinct sound, but on the same time unpolished and brutal. We also wanted the benefits you get by recording the album on a ProTool-system. That gives you the opportunity to experiment a lot. The

most dedicated listener will find a lot of well thought out details put in the background. As far as I’m concerned we’ll never use such elements in a massive way. We use them only to create a more brutal sound. The industrial noises we use are put in the background. It’s where they belong. Most of the noises people think are keyboards on “Twilight Of The Idols” or “Incipit Satan” is in fact effects on the vocals, bass or the guitar. Or we simply go around trashing things in the studio that we sample and put in the computer."

How has this album been received by the audience for it has been a real surprising piece for Gorgoroth?
"I don’t know, but the reviews have overall been good, but I really don’t care whether people like it or not. I create music for myself, and as long as I’m satisfied I don’t care what others might think of the product."

I especially think about some surprising song titles like for example ‘Unchain My Heart’, which reminds me on some Joe Cocker stuff (!) or ‘When Love Rages Wild In My Heart’ (with this special crooner voice on it)… What was the idea behind those? Could we feel a bit of irony?
"These titles are from "Incipit Satan". You have direct the question to Infernus."
Infernus: "No, you certainly can not!"

Dealing with inspirations, I’ve noticed that you tell Beaudelaire (Litani til Satan) or Nietzsche were one of those (the serpent and the eagle that appear on the "Incipit…" cover are actually Zarathoustra’s mates); what did you learn and what pushes you to get inspiration from them? Do you know other French "cursed poets" like Lautréamont or Rimbaud? 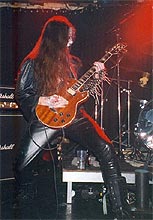 "We are also inspired by Nietzsche on this record. ”Twilight Of The Idols” is the third record we release with a title linked to Nietzsche. I’ve noticed that some people think it’s related to Bathory, but it’s in fact a book Nietzsche wrote. If you read the book you’ll get a better understanding of the meaning of the title. In short it means that some things are good and have the right to live and some things are weak or like parasites and deserve to die. If you see the album title in light of the image on the cover it should be no problem to figure out the rest… Nietzsche had a brilliant concept explaining the moral. The weak must define "Good" and "Bad" in order to survive. Christians do this, and of course others, because of their missing instincts that are still intact in the strong. The weak, as Christians or socialists, define their values to them self and to their surroundings by creating a false God. When Nietzsche says “God is dead” he doesn’t mean that there is no God. He simply makes it clear that the Christian God-image is false and man-made. In order to find truth, you have to tear the existing values down and stir them around to be able to create your own path. Therefore I believe there has to be as many Satanists as there are satanic beliefs. You must define your own "goods" and "bads". For the weak this will lead to absolute chaos, because the values changes at all times cause there are no rules. The strong will experience total freedom, and also be able to live his life in a rational and functional way." 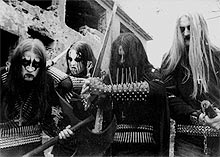 What can you tell us about Tormentor’s departure from the band?

"He had to focus on other things and had no longer the time to play in a band like Gorgoroth. He has not stopped creating music, but is not in the band anymore."

The same goes for Gaahl’s justice problems… Could you tell us what exactly happened?


"The whole matter depends on how you value the word violence. I don’t think that violence necessarily is a good thing. If the violence has no direction and has a ridiculous purpose. People performing that kind of violence should in my eyes face the most brutal consequences. But if you are the victim yourself of an aggressor or a society based on Christian flock-laws and values violence might be the right answer, and for Gaahl this is the case. The problem today is that the flock are trying to keep the ones that are living in an individual way down, by creating flock-laws, flock-values and a flock-society. This has to be fought against at all costs. A person can not find his inner truth by adapting to flock values. Therefore we must use any methods necessary, even if it includes church burning or murder. The stronger individual must be given the power to reach his potential. Most people are trying to sabotage this and must face the consequences." 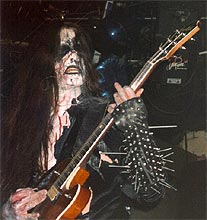 Are you still a part of Nuclear Blast ? Are you satisfied with their job?


"Yes to both questions!"


"It’s very rare that I hear new bands playing Black Metal the way I want it to be. You have bands like Frost’s 1349 that have interesting elements. But the truth is that I don’t have the time or the interest to listen through hundreds of CD’s or demotapes only to find a couple of bands worth listning to. So I stick to the good old ones or what I get recommended from people I know with similar taste of music. As far as I’m concerned I don’t think of myself as a part of any Black Metal-scene. Of course I make and play Black Metal, but what other bands do or not do is not of my interest. That doesn’t mean that I can’t get something out of other bands music. But if they make something that I don’t like… I don’t care. I simply don’t listen to it."

The privilege of the last word is yours , thanx for cooperation and may Gorgoroth haunt your soul in eternity! Hell!