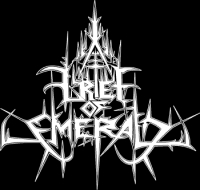 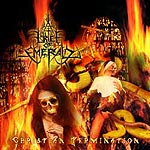 Hello Robert… how are the things going now? I’ve noticed that you have some problems with your drummer, so what happened? I think you’re looking for a new drummer to play live, don’t you?
"Yes, Jonas has some problems with his arm / shoulder so he can’t play for 6 – 12 months!!!! We can’t wait that long I’m afraid so we’ve recruited a session drummer called Calle. He has played with MASTEMA some time ago (Christoffer from SOUL REAPER’s other band) and Calle also has a projekt band with Fredrik Wester (new guitarist in LORD BELIAL). He will also smash the skins on the upcoming tribute to celtic frost on which GRIEF OF EMERALD will appear. He has only rehearsed with us 3 – 4 times and he’s improving alot at every rehearsal. He will do the job – no problem. I guess he will also play with us live in France in September where we will play on a festival."

Your third full length album “Christian Termination” has been released recently… How have the reactions been to it so far, more or less what you expected? Did you achieve the sound you were looking for in the studio?
"The production work is very interesting… So far VERY good reviews, only top grades everywhere, which is nice. I think this will be the biggest CD we have ever released… hopefully, hahaha. I guess I got the sound I wanted in the studio because I wanted it to sound angry, tons of guitars and a tight production but not so god damn "nice" sounding. This time I bought myself a 24 channel studio that I used for this recording, and it sounds way better than the previous equipment I used. It’s alot easier to get a better sound when you have much better stuff to work with. The mastering took place at Digital Fabriken in Sweden with Kenneth Svensson." 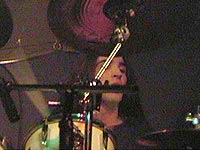 What is your final appreciation towards his work? What lead you to choose Kenneth to master “Christian Termination”? Was it difficult to explain him what kind of sound you were looking for?
"No not at all. I told him "I want it to sound as heavy and loud as possible" I’m satisfied with the result. We used him on the "Nightspawn" CD too. He’s a cool guy and has no problems with the music at all, he just shakes his head and say "Oh my God" when he heard the recording hehehe, not the sound quality though, but the music hahaha. I mixed the CD in my studio, so the mastering took minimum of time. We almost did a quick all over mastering. I think it just took 3 hours, hehehe."

To promote the album, you are now preparing a tour
"We were supposed to go on tour in May but Jonas’ arm fucked up so we had to cancel. We have also been forced to turn down 2 (!!!) tours in Europe, which is very bad. One tour was 5 weeks long and would have been very good promo… but we have said that in September we will take gigs, then we have recorded the tribute track and trimed in the new drummer. We’ll see what happens… I can’t wait to get on the road again." 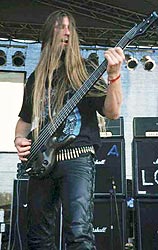 Comparing the new album with the previous ones, I can hear some little changes in the musical background. You know, GRIEF OF EMERALD now sounds more Death Metal, a mixture of bombastic atmospheres with a massive guitar sound and destructive drum blasts… maybe a mixture of influences from MORBID ANGEL and DIMMU BORGIR? In general “Christian Termination” is faster than your previous releases
"I guess that’s true, because on "Malformed Seed" we listened to what all reviewers wanted and then we received average grades… this time we just thought "Fuck all" let’s do a CD that we want, we don’t play for anyone else, we play for ourselves!!! And it seems that it worked out fine this time. We got so fucking tired of being put in the "nice" sounding box. We didn’t care at all if people would like it or not. I get very pissed off when we receive an avarege grade in a review hahaha. It makes me wanna kill. I think you can admit that we sound way more aggressive than we’ve ever done. The most funny thing is that the tracks were supposed to go faster but Jonas shoulder couldn’t fix that 🙁 … he had very big problems in the studio because his fucking shoulder hurted…" 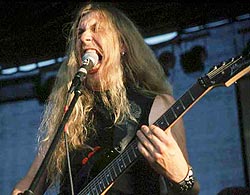 Lyrically the new stuff is based on which subjects?
"Read the title – "Christian Termination", hahaha. It’s a pure manifest against christianity. I wanted to show what I really feel towards christianity. My ex-girlfriend said that she got a very strange feeling when she listened to the CD… almost a scary feeling, she said "you sound so angry and evil that you almost frighten me" hehehe. I guess we got what we wanted."

Do you have any particular song on which the fans react more enthusiastically?
"We played ‘Alas, Spiriti Sancti’ live on the last tour just to test the song… people did go wild. One reporter that was on the gig in Brussel was supposed to do a live review but he was so good damn enthusiastic, so it ended up with a long interview hehehe. People did go really wild on that song!!!" 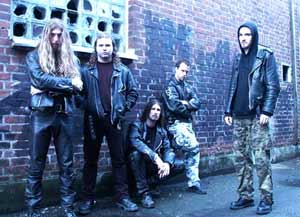 How do you usually work when composing songs? Is it an individual process or more a team kind of thing?
"A little bit of both actually. Jonas likes to make the songs at home, but me and Johnny like to do them in the rehearsal place. Jonas did a lot on this CD, but I guess we do the most things as a team."

How has Listenable treated you during the years? Have you had a lot of other offers and are you satisfied with Listenable?
"Listenable sucks!!!! Hahaha, no just kidding. They are a good label, I think. They always stick to their words. If they say you’ll have the money on friday… well, then we have it on friday. "Christian Termination" is our last release on Listenable on this contract. We’ll see what happens in the future, maybe we’ll sign again with them… Time will tell."

Do you have anything else to say?
"Thanx as hell for the interview and the support. Please check out our website www.griefofemerald.cjb.net for latest info about releases, dates merchandise, etc… Stay Metal, slay the christians!!!"