If you call yourself a dedicated Swedish Death Metal maniac than “Mass Funeral Evocation”, the debut album of Stockholm based LIK, will end up with a deadly smile in your list of fave releases of 2015. Here is an extended English version of an interview, which was originally published as a shorcut in German Cudgel Mailorder magazine. The interview was done with drummer Chris “Piss” Barkensjö, who already did a damned good Death Metal job in the past with REPUGNANT, KAAMOS etc.! Read & worship!


Hey Chris, your old band KAAMOS, who had a sort of “die hard” underground following split-up for a second time ca. 2009. You also had a sort of stand-in time in GRAVE and several other bands, but when did you actually lick the blood again in order to play some real to the bone Death Metal?
"Hey Ralf, thanks a lot, it’s my pleasure. You are correct sir. I was also one of the original members of REPUGNANT. I quit them after the “Hecatomb” EP to join KAAMOS. I will always have Death Metal within me. So I didn’t have to lick any blood to make bonecrushing Death Metal."

What was the initial point for you to do a totally Death Metal worshipping “project” again?
"I started jamming with Tomas when I got bored rehearsing by myself in 2014. We wrote some cool stuff. Asked Niklas to join us and made a quite cool album (Tomas and Niklas are also active members in KATATONIA – Ralf).

By the way, what does the moniker LIK mean? Is seems to be a sort of shortcut, right?
"It’s not a shortcut. It simply means corpse in Swedish."

What kind of feeling do you miss in today’s Death Metal scene and do you think that the LIK debut “Mass Funeral Evocation” closes a missing link for the current scene? I mean we have a real “Death explosion” currently with bands popping up worldwide under the banner of classical, ancient, old school or whatever Death Metal?
"That would have to be passion and that special "nerve" within the music. I can’t really describe it since you just hear it when you do it right!"

Can you handle it when fans and press compare LIK to bands like DISMEMBER, early EVOCATION, BLOODBATH, ENTRAILS and alikes? Where do you see the, let me say, own flair / spirit of LIK?

"Yes, absolutely! DISMEMBER is the number one influence for LIK. I haven’t heard the comparison with the other bands you mention. But they are Swedish too, so I guess it’s inevitable not to sound alike since I guess our heroes are probably the same in a sense."

You were with KAAMOS already a part of the scene when bands like REPUGNANT, SCURVY, SERPERNT OBSCENE, INSISION etc. started. All those bands were in their beginnings based on some sort of early 90s spirit, means doing real demo tapes, keeping the real and raw spirit etc.! What do you remember about those days who really had an impact on what followed later on?
"As I mentioned before I left REPUGNANT sometime after the release of the “Hecatomb” EP and joined KAAMOS. Those where good times and a lot fun. We had some really good shows back then when people came out to see shows and party. Everybody supported each other and there was no bullshit. At least what I can remember. I still have a lot of demo tapes left from those days. And there is that "nerve" in them. Good shit!!!" 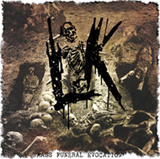 Is it true or has it always been a rumour that your younger brother is actually the drummer of VERMINOUS, who were heavily inspired by KAAMOS and alikes in their beginning?
"It is true that my brother was in VERMINOUS, but he played guitar. But you could say that Agge their drummer is like an extra brother. Yes, they where very inspired by both KAAMOS and especially REPUGNANT I think. But they developed their own sound in the end. They are a pretty fast band, too. We played live with them a few times. They were cool!!!"

Of course we like to know if you have some proper plans to perform live with LIK, especially when it comes to German shows and getting wasted with cheap German alcohol!?!
"Of course we are going to play live. And absolutely do we want to come to Germany and drink your beer and play some deadly tunes. I am hoping for a slot at next years Party.San Festival!"

Thanx Chris for that little chat! Hope to have some LIK madness here sooner than later! The final closing words are up to you, here we go…
"Thanks for showing support and interest in LIK. If you enjoy old school Swedish Death Metal, get a copy of "Mass Funeral Evocation"!"