Two years ago, the Swedish Death Metal band NECROPHOBIC finally forced a well-deserved breakthrough with the fantastic album “Mark Of The Necrogram”. Last month, the follow-up “Dawn Of The Damned” was released… an album that a lot of Metal fans were looking forward to. We had a nice conversation with guitarist Sebastian Ramstedt.

On the 21st of March – the beginning of the corona crisis – you were one of the first Death Metal bands to stream a live-show directly from Stockholm. Unfortunately, at the moment of truth, several things went wrong. 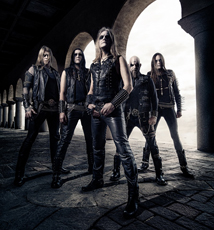 “Indeed. We had a lot of fun. But it was also a big disappointment, because nothing worked as it was supposed to on a technical level. What we mainly learned from it, is that we need to prepare even better in the future. As you mentioned earlier, we had the idea of putting on such a show long before other bands started doing it too. We contacted several people and rented equipment to stream and record everything. But the hard drive literally crashed a few minutes before our performance was due to start. We even considered whether it would be better to cancel the whole thing. But in the end, we just went for it with the help of a mobile phone. In retrospect, I’m glad we didn’t back down at the time. But the circumstances were far from ideal.”

Four songs from the set you played (‘Awakening’, ‘Darkside’, ‘Tsar Bomba’ and ‘Revelation 666’) are used as bonusmaterial for the mediabook version of “Dawn Of the Damned”.
“That’s right. The sound was good and we were able to record our set. It was only the cameras that stopped working. Those live-recordings are a sort of ‘revenge’ (laughs). It is also different from what you normally get, since you don’t get to hear an audience. But it is a very honest recording.”

A few days after the concert, you were supposed to hold a ‘question & answer’-session on your Facebook-page. However, that event was called off at the last minute as some of your family members showed symptoms of corona. 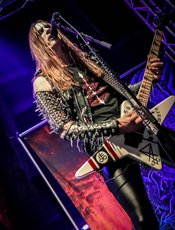 “Indeed. I have four children. My oldest children were with their mother at the time and had become infected with the coronavirus. We were of course very concerned at the time, because I had no idea whether I was infected as well. We did not want to risk anything, so that session was ultimately cancelled. It was a disappointment, but I was obviously much more concerned about my family. Fortunately my children are all healed in the meantime and have no side-effects. And that is a great relief.”

NECROPHOBIC has been around for about 30 years and has always been quite popular in the Death Metal scene. Nevertheless, you never really managed to make the step to a really big audience. “Mark Of The Necrogram” – your previous full-length album – seemed to have finally managed to force that long-awaited and well-deserved breakthrough. 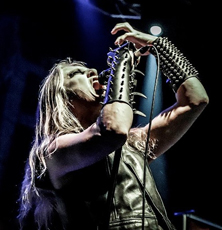 “I have that feeling too. Our single ‘Tsar Bomba’ played a major role in this. Many old school fans thought that song was too commercial. But ‘Tsar Bomba’ was immediately picked up when it was released, and has become our sort of ‘hit’ in the meantime. That song has opened many doors. Suddenly we were playing in front of an audience that was ten times bigger than before. We also noticed that many people thought that the songs from “Mark Of The Necrogram” were the highlight of our set. Everyone used to ask for songs from our debut album “The Nocturnal Silence”. And that is no longer the case at all. We have gained a lot of fans with “Mark Of The Necrogram”. We have now released ‘Mirror Black’ as a single. And that song immediately sticks as well because of the riffs and rhythm. But it is a much more extreme song with almost nothing but blastbeats. It’s much faster and bolder than ‘Tsar Bomba’.”

You have promoted “Mark Of The Necrogram” extensively. For example, you have performed at many major festivals. What we really noticed, is the fun that you guys always seem to have on stage. The crazy faces that your frontman Anders Strokirk makes, for example, can not be counted on one hand. 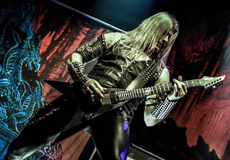 “I am 48 years old. And as a musician and as a band, you have to decide at some point where you want to go. We are a bit older. But we still totally want to go for it. And we take the band very seriously. We have the feeling – especially since “Mark Of The Necrogram” – that we still have a lot to offer. And we are on stage with twice as much energy. We have the necessary experience. And we know how to bring our music to a stage in a convincing way. We are all in the band children of the eighties and went to see bands like IRON MAIDEN and WASP. Those bands always put on a great show. We’ve taken a lot of elements from classic Heavy Metal bands and put them into our show. That way, our music also comes across much more energetic.”

When you played at the festival Eindhoven Metal Meeting in 2018, your drummer Joakim Sterner was not in the band. Why not? 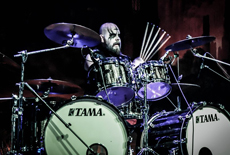 “Joakim broke his foot in an accident in August 2018. He didn’t play in NECROPHOBIC for almost a whole year after that. However, there were a lot of shows scheduled that we really could not cancel. And we were lucky that Matte Modin (FIRESPAWN, ex – DEFLESHED, ex – DARK FUNERAL) was able to temporarily replace him. Matte did that very well, he was able to adapt very easily to Joakim’s style.”

Last month, your new album “Dawn Of The Damned” was released. Was it easy to find the time to concentrate on the songwriting since you were out on the road quite regularly?
“As you may know, I was not a part of NECROPHOBIC between 2011 and 2016. During that period, I mainly concentrated on finding the necessary energy to get back into songwriting. I rejoined the band in 2016 and started writing songs for “Mark Of The Necrogram”. And I just haven’t stopped. For example, ‘Mirror Black’ dates from even before “Mark Of The Necrogram”. I’ve been constantly writing new songs. I had a lot of good ideas and inspiration and was in a very creative period in recent years. Apart from a handful of riffs, I wrote just about all the music and all the lyrics for “Dawn Of The Damned”. But “Dawn Of The Damned” is still the work of a band. Whenever I present an idea, we always talk with the whole band about the best way to proceed and how to work on the songs. Everyone is closely involved in the entire process. “Dawn Of the Damned” wouldn’t sound like the record sounds now if not everyone did their part.”

“Dawn Of The Damned” is a concept album that takes the listener on ‘a trip through fire and darkness to the realm of death’. That sounds intriguing. 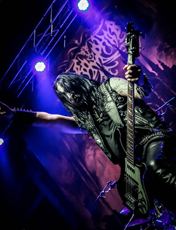 “I wanted to do things a little bit different this time (laughs). And I mainly reverted to my own experiences such as lucid dreaming and astral projection. In the nineties, I spent a lot of time exploring the darker side of the human mind. I kept notes of that too. And I ended up writing a story for “Dawn Of The Damned” based on those notes. To cut a long story short, it all revolves around starting over, burning your bridges with the past and develop yourself as a person. “Dawn Of The Damned” takes you, as it were, on a journey through the consciousness of the mind. You should certainly not see it as a story that someone like KING DIAMOND would come up with. It is much more about the feelings, the atmosphere and the things that I experienced then. It took me a long time to find the right way and the right context for these songs. NECROPHOBIC has become a much more mature band in recent years. And that has opened the door. There are still a lot of things I want to write about. I like to be constantly busy with something. That gives me energy. For example, I started studying again at the university a year ago. I am now taking a course to become a teacher.” 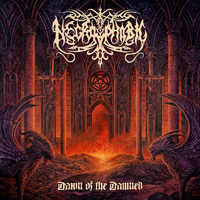 “(enthusiastic) Well, that’s the idea! When we released “Darkside” in 1997, we were already talking about that. As a teenager, I always loved how the sleeves of IRON MAIDEN often had references to their older work. And that’s what I wanted with NECROPHOBIC as well. “Dawn Of The Damned” is the third part of the whole concept we started with “Darkside”. We sat together extensively with the artist – Kristian ‘Necrolord’ Wåhlin – to show what we had in mind for “Dawn Of The Damned”. I’m not sure if we will continue with this on the next record. But to be honest, I think the concept we envisioned in 1997 has now been completed. Because a fourth part is perhaps a bit too much.”

You wrote an article on your Facebook-page, wondering what the careers of bands like IRON MAIDEN, METALLICA, CELTIC FROST and your own band would have been like if certain members had stayed in the band. It was really interesting.
“I am first and foremost just a Metal fan myself. I like to follow bands, visit gigs regularly and buy records. And I often ask myself that question when a bandmember has left a band, and you sometimes hear a change in the musical direction afterwards. We had to deal with it ourselves when David Parland left NECROPHOBIC in 1996. He had left his mark on the band for years. And afterwards we also heard comments like ‘David would never have done such a thing.’. And I didn’t always think that was fair. People sometimes think that if David had stayed, the band would have made “The Nocturnal Silence – Part II”. But I don’t think so.”

You have a rather extensive back-catalogue by now. You could easily put together a setlist with only highlights. Isn’t it about time for an extensive headline-tour where you will be on stage for about an hour and a half?
“It’s funny that you make that remark. Because we recently talked about it as well (laughs). We have a lot of songs which are really popular and that we can hardly ignore. We already fill a whole set with those songs. And that gives us very little room to put some lesser-known material into the set. A longer set… I don’t know if that’s a good idea. We play quite extreme music. And that doesn’t have to take much longer than a maximum of 75 minutes. Otherwise the attention gets lost. I personally think a one-hour set is ideal. All our gigs booked for this year have been moved to 2021. We don’t have much room to add any additional gigs. It’s difficult to look far into the future right now. Because at the moment, anything can change at any moment.”