Shortly after we had tracked down original MASSACRE bass player Michael Borders, good ol’ Lacy managed to interview another original member of a legendary and certainly not less influential act. His name: Brian Montana. His reference: guitar player in the early days of San Francisco’s POSSESSED! Read on to find out a bit more about the man and his glorious past…

Did you know the guys earlier?
“No, they had a guitarist wanted advertisement in BAM (Bay Area Music) magazine and I responded to the ad.”

Did you often hang together?
“After I joined the band, yes, we hung out together a lot. I was the original guitarist besides Torrao, so when I joined we were still just a garage band; didn’t even have our first gig yet. After we started playing the clubs, we bonded more and had a lot more fun with it.” 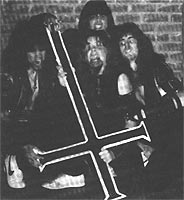 In which bands did you play before you joined POSSESSED?
“POSSESSED was actually my first band. After leaving, though, I played in many bands. Right after I left POSSESSED I started a band called ABNORMAL… sometime in the late 80’s I think. Two of the songs I wrote and recorded are called ‘The Execution’ and ‘Pearl Harbor’."

Which bands have had an effect on you?
“Many bands have influenced me. The list would be too long to mention, but here are some of the main ones: EXODUS, IRON MAIDEN, JUDAS PRIEST, YNGWIE MALMSTEEN, QUEEN, THE WHO, VAN HALEN, JOE SATRIANI, LED ZEPPELIN, ELTON JOHN, THE POLICE, and a lot of 70’s music.“

Did you / do you play other instruments too?
“I play some drums too, but mostly guitar.”

Please tell us about the beginning of the career of POSSESSED!
“We used to practice in Torrao’s garage… in San Pablo, CA. I drove an old beat-up baby blue Chevy Camaro to practice. I had to cross my fingers everytime I drove there hoping that the car would make it. I was pretty poor in those days. That old car did me well, though.” 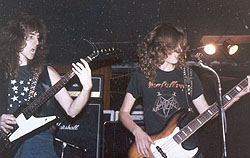 Tell us about your rehearsals!
“Not much to tell. We just went over the songs until everybody got it right and we talked about the possibilities of playing some shows in the near future.”

Who did create the logo of the band?
“The band needed a logo and I asked my friend Bob Estrada to come up with something. He created the POSSESSED logo with the devil tail. They kept the logo even after I left the band and never gave Bob credit for it. They put someone elses name on it. That was uncool and unprofessional to say the least.”

Did you write music or lyrics too?
“I wrote the song called ‘Tribulation’. Again, after I left the band they didn’t give me credit for it.”

Which were the very first POSSESSED songs?
"The very first songs we used to play were: ‘Swing Of The Axe’, ‘Burning In Hell’ and ‘Tribulation’ to name a few." 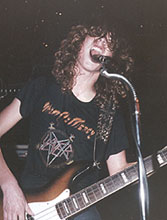 Why and when did Barry Fisk, your first singer, commit suicide?
“I never knew Barry. I joined the band right after he committed suicide. I joined right around the time Jeff did.”

Instead of him Jeff Becerra came in the band. Do you remember about it? Was Jeff younger than you?
“Yeah, Jeff is a 3 or 4 years younger than me. We joined right around the same time. Actually, I think I was there before Jeff.”

Please tell us about the POSSESSED demos! As far as I know, you have playedon these recordings, haven’t you?
“Yeah, I played on the first POSSESSED demo. We recorded it at Starlite studios in Richmond CA. I played on ‘Swing Of The Axe’ which later was released by Metal Blade Records as a compilation. Again, they didn’t give me credit for playing on that record either. They put Larry’s name on it. Again very unprofessional and really uncalled for.”

How were the very first POSSESSED shows? How often did you play? Were there some Metal clubs at that time?
“There weren’t very many Metal clubs at that time, but there were a couple. Playing those shows in those early days was great. We played a lot at Ruthie’s Inn. A club in Berkeley, CA. We opened for EXODUS all the time. We also opened for SLAYER on several occassions. Both the bands and the crowds were insane. It was amazing. Awesome.” 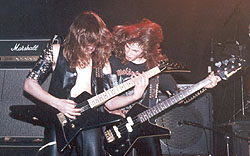 You have came from San Francisco, from the surroundings of the Bay Area. Do you remember the scene of those times? How was it, respectively which bands were active? Tell us please detailed about it!
“Well, I was mostly involved in the Metal scene those days so that’s what I remember the most. METALLICA had just realeased their first album, “Kill ’Em All”, and it was on fire. Dave Mustaine left METALLICA and started MEGADETH. At that time there was a rumor going aroung that I was MEGADETH’s new guitarist. I remember Gary Holt from EXODUS calling me and asking if it was true. Of course, it wasn’t true. Brian Poland was the guitarist they were confusing me with. Anyway, those days were crazy. Thrash Metal was just starting to take off and it was a lot of fun. Kirk Hammett and I actually had a mutual friend back in those days. His name was Derek. Anyway, I would see Kirk once in a while, here and there. I remember talking to him one time and he told me that METALLICA was going to be the next IRON MAIDEN. It sounded hard to believe back then, but now it sounds funny… they’re 100 times bigger than IRON MAIDEN will ever be.”

What kind of fanzines were existingback then? Did you often read or buy fanzines?
“Not really.”

You were on the Metal Massacre compilation with the track ‘Swing Of The Axe’. Did this song draw the attention to the band?
“Yeah, that was me playing on ‘Swing Of The Axe’. I loved my solo on that song… I got all nutty with the whammy bar. That song was fun to play. Some songs were hard work to play and some were fun… that one was fun.”

Why and when did you leave the band?
“I left the band because Torrao had a terrible attitude problem and wouldn’t stop ragging at me. He was like some senile old lady that just wouldn’t shut up. He had a problem with my image. He didn’t think I was evil enough or something. He was always ragging on me to wear an upside down crucifix and be satanic. That just felt phoney to me so I told him I wouldn’t do it. But the nagging wouldn’t stop. Everytime we practiced or I saw him I would have to hear it all over again. Then he wanted me to start wearing a SLAYER type outfit. I told him that SLAYER was already doing that and that I didn’t want to copy them… that we should be original. Then he started nagging me more about the SLAYER stuff. It kept going on and on and I just couldn’t take it anymore. I told him if he didn’t knock it off I was going to quit. He kept nagging me and being an asshole in general so I told him to fuck off and I quit. That was it. I just couldn’t take his bullshit anymore.”

Did you know Larry Lalonde, who replaced you?
“I knew of Larry through Jeff. I think they went to high school together.”

What did you do after leaving the band?
“As I mentioned above, I started a band called ABNORMAL.”

Did you establish other groups?
“Yes, several, but unfortunately, none of them gained any sizeable audience.”

Did you stay in touch with the guys after your departure?
“Not really, but I did see Jeff around sometimes. I remember seeing him at an YNGWIE concert at the Fillmore one time, etcetera.” 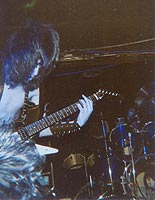 POSSESSED has released two classic albums (“Seven Churches”, “Beyond The Gates”) and an EP (“The Eyes Of Horror”). How would you characterize these releases, with your own words? Which album is your favourite?
“After I left the band I didn’t really pay attention to what they were doing. I really haven’t heard any of these albums.”

POSSESSED became a cult band, a legend of the Death / Black scene, they’ve had an important effect on many bands. Didn’t you regret leaving them?
“It was unfortunate that I had to quit, but as I mentioned above I just couldn’t stand Torrao’s constant bitching anymore. To this day, I still don’t see how I could have stayed.”

Do you often buy CDs or LPs? Do you often listen to music?
“I listen to everything from MEGADETH to ELTON JOHN. I like any good song, whether it’s Death Metal or Pop.” 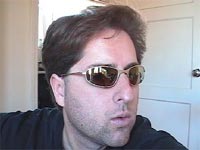 Please tell us about yourself, about your family, job, hobbies etc. What do you like doing in your free time? Do you have some special occupation?
“I’ve been a senior software engineer for the last 10 years. It’s a good profession, but a lot of the high-tech jobs are going overseas, so it’s getting more difficult to find the good jobs. It’s good work though.I’m also starting up my own website. It’s called 4Rendezvous.com. It’s an online dating service and website. I’m going to launch it in August 2004, so pretty soon. People can come from all around the world to meet there. It’s gonna be cool. Check it out. Finally, I’m married to an awesome woman, her name is Michele, and my son’s name in Enzo.”

How would you characterize the ex-POSSESSED members?
“Torrao was, and probably still is, an immature jerk. He was impossible to be around in any setting.”

Who is /was your best friend?
“I guess I was always partial to Jeff. We always got along well.” 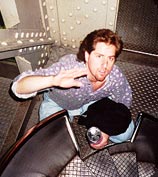 Are you still in contact with them?
“Actually, it’s funny that you ask. I’ve been talking with Jeff again for about 6-8 months now. We recently decided to collaborate on a new original POSSESSED song. Pretty cool huh? I’m going to write a song for us to work on and I’m sure Jeff will want to change some of it, so in the end it will be a collaboration, a co-authoring. It’s going to be killer. Please stay tuned for that one.”

Do you maybe know what they are doing n owadays?
“I know Jeff works for a hospital, but I don’t know what the other guys are doing.”

Brian, thanks for your answers, unfortunately I couldn’t ask so much haha! I wish you all the best and good luck!
“Thanks. Good luck to you too. There’s actually a part I forgot to mention that I wanted to: When I mentioned that I saw Jeff Becerra at the Fillmore in San Francisco (at the Yngwie show) he was literally begging me to buy him a drink. He was broke, not a penny to his name, and he was having alcohol withdrawals. I had some sadistic fun with that and just kept him hanging around, but I never did buy him that drink. I thought it was pretty funny. I eventually ditched him and left the club. Anyway, some of the old fans might find that amusing.”