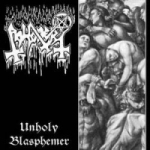 ABHORER are total cult. Period! That’s a fact and it’s not necessary to introduce them anymore as most of the headbangers out there have at least heard from this evil force from the Far East. It’s really sad that this band split up too early without releasing more hellish assaults. All their releases are in high demand by numerous hellbangers around the world who missed the originals. So it’s a great idea by Xtreem Music to (officially) re-release the entire discography of this bestial horde from Singapore on one disc in form of the "Unholy Blasphemer" album. This compilation features their one and only full length album "Zygotical Sabbatory Anabapt" (1996), the 7" single "Upheaval In Blasphemy" unleashed in 1994 (both items were originally released by Shivadarshana Records back then) as well as their 1989 demo tape "Rumpus Of The Undead" (known from the split LP with Japanese NECROPHILE, released by Greek label Decapitated Records / Wipe Out on vinyl in 1991… a while ago re-released unofficially (?) again on CD by Unisound incl. the 7" EP as bonus). ABHORER were one of the first South East Asian hordes who proved that there can be also forged blasphemous music in that area. Their demo tape "Rumpus Of The Undead" (four tracks plus intro) is a very raw and violent Black / Death Metal attack following the tradition of unholy warriors like early SARCOFAGO and BLASPHEMY. Chaotic, fuzzing guitar sound and fast forward pummelling drums… everything played very primitive but effective. A total underground cult recording. "Zygotical Sabbatory Anabapt" is a fine Death / Black Metal album which emerged from the Singaporean hell. The band also implemented some Thrash Metal influences in their sound here and there (if I say Thrash Metal then I mean bands like old SODOM, KREATOR and the likes). The 9 songs of the album were produced very well and showed that the band improved quite a lot. The pace is mostly extremely fast and this merciless onslaught takes no prisoners. A great brutal sonic attack! Too bad that the band disappeared after this great album. The two tracks of their 7" EP were recorded in 1994 and are executed in the typical bestial ABHORER style. I always liked that the band consequently followed their musical direction without leaving that path for one millimetre. No experiments, no other bullshit: always pure unholy Metal!! "Unholy Blasphemer" is a document of time and is highly recommended to maniacs out there who don’t own all ABHORER stuff and that’s the chance now to complete the collection. I only wished the CD would include more old band photos and stuff… but you can’t have everything. Get in touch with Xtreem Music and order this unholy piece of blasphemy. www.xtreemmusic.com.