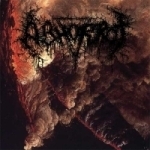 In the time since AHBORROT first appeared on the scene in 2008, the band has released a respectable series of demo tapes. This year, however, marks a change for ABHORROT: not only is “Rites Of Prehistoric Darkness” the band’s first 7-inch, I believe it also shows them exploring a new theme that fits both them and Death Metal itself. Not a dreadful change of the sort bands like AMORPHIS and PARADISE LOST made – nothing that drastic, thankfully – but still something different. What I’m referring to is the word ‘Prehistoric’, which to my knowledge rarely, if ever, appears in a band’s album title. Prehistory, when mankind lived more like an animal than he does today, and the world was blanketed in primeval darkness every night, would seem to fit Death Metal like a glove. Take, for example, ‘Volcanic Eruptions’, track 1 off the EP. Just an intro song, perhaps, but with prehistory in mind the song becomes something different: an introduction to the intangible but ever-present past of our species; a violent, chaotic time. Indeed the second song “Morbid Flesh Sacrifice” which has appeared on previous ABHORROT tapes, takes on a similar aspect, painting a picture of enormous carnage and primitive idol worship around an ancient campfire. Finally, ‘The Catastrophic Eclipse’ finishes off the EP by blanketing the sky with dust, blocking the sun’s nourishing rays, withering plants, killing people, and making the Earth nigh uninhabitable just as it was with the dinosaurs. One thing that could be better here is the drums. Somehow they sound high in the mix, sitting atop the other instruments. But that’s not much to complain about. I heartily recommend this EP for anyone with a passion for dark and morbid Metal. Buy this if you want to die as few have died since civilization began! www.myspace.com/abhorrot, http://terrorghoul.blogspot.com