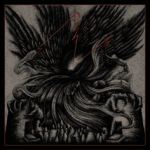 It’s been a while since I heard from this Austrian duo. The last EP, "Rites Of Prehistoric Darkness", was good and I really liked the band’s exploration of prehistoric themes. Not a lot of bands take that route, although a recent example is Canada’s ANTEDILUVIAN. This EP is less about primordial ooze and tackles a more tried and true theme of cultish veneration of death, carving of flesh, and infectious disease. The sound on this one is thick and abyssal, not super dingy but far from clean. There’s a lot of negativity to be heard. There’s a downright mean set of riffs on the title track, and an evil crusher on ‘The Burning Incarnation Of Death’. Sometimes bands can draw them out for too long but I love creepy intro and outro tracks and ABHORROT includes a good one for each song. Perhaps you could say one for each is a bit unnecessary: ‘DeathWorship Doom’ is by far the best song on this record and could open Side B no problem. No matter, at least the song is there to dispose of us. Finally there’s ‘…Of Pestilence And Plague,’ which closes the record. I’m not sure what got into them when they did this side but it’s great, the strongest two songs for sure. They are relentless. I think this is a very well mixed EP too, the vocals sound even with the instruments. In fact I’d say guitars are louder and meaner than anything else that gives a loud raging sound. This is a pissed off recording. Do yourselves a favor and check it out. More information at: http://dthcltrtl.net/bhrrt, www.facebook.com/abhorrot, http://yersiniapestis.bigcartel.com