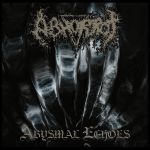 “Abysmal Echoes”, which was released in 2019 but recorded in 2015 already, marks ABHORROT’s debut full length record after plenty of demos, EPs and splits. While metal-archives.com sates the band is still active, I believe that with the initial release of “Abysmal Echoes” the band called it quits. Since I really enjoyed their 2014 EP “Sacrificial Incarnations Of Perpetual Death” I was quite eager to hear how this full length debut turned out and how ABHORROT’s sound evolved over the year(s). So when recalling said EP I believe to remember atmospheric Death Metal with maniacal song-structures and a blackened core – basically the typical late ‘00s – early ‘10s version of Death Metal that was popularized by the likes of TEITANBLOOD et al. When “Abysmal Echoes” started I immediately recognized that ABHORROT definitely evolved but rather backwards than forwards. The album still supplies lots of blackened Death Metal with maelstrom-ish guitar riffs and meditative blast beats topped with extremely reverbed vocals, but the overall aura is a bit different. The songs provide a very simple and primitive feeling enhanced by lots of repetitions and a very straight forward style of riffing. This primitive vibe gets enhanced by a very raw and unpolished production. Nowadays of course all so-called “OSDM” releases feature said “raw”, “dirty” or “unpolished” productions but “Abysmal Echoes” manages to make you feel it too as I literally felt as if I was soiled with cemetery soil after my first spin. The production doesn’t let you hear a lot but still barely enough to let you know what’s actually going on. It functions like some kind of a narrator who leads you through a very dark and primal world of death and decay. Song after song one gets sucked deeper into the primitive realm of ABHORROT until the record is over, as simple as that. In case of you being somebody who gets off on that kind of music many more spins would follow I’m sure, but if you prefer more “beautiful” versions of Metal music “Abymsal Echoes” is probably not your cup of tea. More band information at: www.facebook.com/abhorrot, label contact: www.morbidchapelrecords.com, https://morbidchapelrecords.bandcamp.com