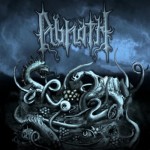 To set things straight first: these ABHOTH are not the band from Sweden that released three demo tapes and a 7” in the 1990s and had, among others, Jonas Stålhammar in an early line-up. No, these guys are from Montenegrin capital Podgorica and started in 2006. It took them eight years to put out their first release, a self-titled EP with three tracks. Stylistically, ABHOTH are rooted in Death Metal, mixed with some elements of Thrash Metal and a great dose of keyboard usage. The result is not really thrilling, since the keys are soon watering down all the power and give the opener ‘Blood Of The Ancients’ a touch of SABATON. Not the best reference, huh? Thankfully the following ‘The Enemy Of All That Lives’ convinces with a lot more power, nice guitar harmonies and a more careful use of keyboards. In some moments, I feel reminded of the best moments of early Gothic Metal. Sadly the final ‘Beyond The Gates Of The Silver Key’ can’t keep that level, for it comes along pretty wishy-washy and undecided. Furthermore, the programmed drumming is quite annoying in this one. After those three songs, it can not be denied that ABHOTH have potential, but at least a real drummer is an essential need. And I personally wouldn’t mind if the band would use less keyboards… If you want to check them out, go to: www.facebook.com/abhothofficial or visit their label www.satanath.com