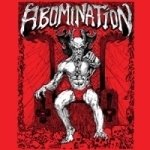 I might be the worst person on planet Earth to put on reviewing ABOMINATION or MASTER, as you might already have read several times, I am addicted to the old records of these two very bands. Now the Czech label Doomentia has released the first mentioned band’s two demos from 1988 and 1989, on CD and here I am ‘banging away. The demos offer crossover deluxe, the perfect blend of Death and Thrash Metal, with Speckmann’s wicked scream, not fully turned into a growl yet. Thrashy riffing with a heavy and dark bottom, some over the top thrashy guitar leads, furious drumming and rhythm patterns that still wreck necks. The music is so damn well written that it still catches and latches on today, you only need a single spin of the album, to be caught in the madness of ABOMINATION. I especially dig the first demo, the sound is thick, the bass has a very dominant role and there are some really wicked ideas on display, most of them working well and damned hard hitting, that’s how I like my Death / Thrash Metal, straight to my face, relentless and quite crazy. The second demo is quite nice as well, just not as fresh as the first, doh, but still, ABOMINATION is aiming in on their stable and plays a more secure card, but is still quite progressive in their set up. But still god damn slaying! If you didn’t obtain this collection when Metal Age released it entitled "Curses Of The Deadly Sin", you have to pick it up now, as these two demos have been a great part of defining Death Thrashing Metal and pure Death Metal as well. Some of the tracks made it more or less straight to later albums from ABOMINATION, some has been re-written a tad, and then used. All 12 tracks on these two demos are quite strong and possess an identity of their own, quite a task and a sign of strong song writing, which haunted both MASTER and ABOMINATION in their early days! www.doomentia.com