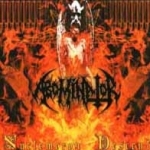 I am a fan of ABOMINATOR since their debut “Damnations Prophecy” out on the Necropolis Records label in 1999. Throughout the years this Australian bunch of true maniacs have never disappointed me, and I have never grew tired of their relentless and brutal Black / Death assaults. “Nuctemeron Descent” presents a fleshed up line-up for ABOMINATOR (with the founding members Chris Volcano and Andrew Undertaker still in command), and this third album shows a lot of progresses in every department. ABOMINATOR can now be seen as a down under version of ANGELCORPSE, yes they are that good. The compositions offer more variations than before, and they sound clearer and less one-dimensional (even if the somewhat monotony factor present on the two previous albums has never bothered me too much to say the truth). ABOMINATOR are to me the best band of their kind I am aware of, and if you look for something really exceptional, I think you will welcome “Nuctemeron Descent” with open arms. Just listen to the track ‘Black Flames Of Expulsion’ and you will catch instantly the grandeur of the whole album. ABOMINATOR grind down their competitors with ease, because they know how to inject a sense of drama and grandiose tragedy to their tracks, giving them another dimension. ABOMINATOR ascended a higher level with this album, and I can’t do anything else but to strongly recommend to everybody to check this CD out. Support these warriors in their crusade against falsehood, pose and mediocrity. A miraculous album by a no less miraculous band.