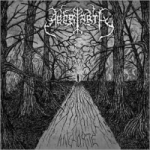 Just one year after the release of their second album Spain’s one man band attacks again with a MCD with only two songs but well over 26 minutes in duration. Not a single thing has changed in their style of doomed, perdition Black Metal sound. Maybe this time the drums are louder, but that’s it. Some call this Suicidal Black Metal. In reality it is more near to Post Rock with screamy vocals than anything else, so KATATONIA and ANATHEMA will come by as references, although in a much simpler, rawer approach, but with that dismal feeling all over. If you are a fan of the style, I can almost sense you will like it. If you happened to abhor the style, this will definitely won’t change a thing. I have always thought that this style of Metal music is damn limited to create something out of the ordinary and ABORIORTH is not doing anything for me to keep on looking for their earlier efforts. www.blackseedprod.com