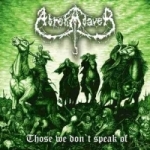 First up, a release with a cover painting like the one of “Those We Don’t Speak Of” is craving for a vinyl release with a gatefold sleeve. I really hope a label will show interest here as this cover painting by Selfdesecrator is so fuckin’ awesome and it would be a shame to rot on a CD cover only. One of his best works so far if you ask me. Ok, a great cover is no excuse for bad music. Damn, that’s not the case here, too. ABREKADAVER are, despite the strange name, fuckin’ killer. Brutal and violent as DEICIDE in their best days, with moments, riffs and solos, reminding of MORBID ANGEL during their “Domination” – period (e.g. in ‘Rat Line’) and certain riffs inspired by CANNIBAL CORPSE (e.g. in ‘Inheritance Of Blood’). I hardly can believe that a 3-piece is creating such a massive wall of sound. Talking about the sound and the production of this album: Killer, fuckin’ killer! Recorded in DM6-Studio by Pablo Clares (MAGNANIMVS, ATOMIC AGGRESSOR…) is getting to be something like a seal of quality for Death Metal bands from Chile. A pity that only bands from this country are recording there so far. Well, ABREKADAVER are from Chile and creating, as I said, a massive wall of sound, the band itself writes on one of their flyers to be influenced by SUFFOCATION, MORBID ANGEL and BAPHOMET (guess they are talking about the American BAPHOMET with their “Dead Shall Inherit” album) which fits, too. At the end it is brutal Death Metal offered played with an unbelievable intensity. The song writing is just brilliant and the breaks on this album are topnotch! 2010 had already some amazing albums and this CD is among the best of it. It’s not old school, it’s not modern Death Metal, it’s simply one of the best fuckin’ Death Metal I heard lately. In a way it reminds me to LUCIFERION’s debut album “Demonication (The Manifest)”, not that much musically, more as this one was such an outstanding recording, too. Enough said, I’m still blown away. Released through Rawforce Production and hopefully available at some mailorders throughout the world. Get it!!! Contacts: www.myspace.com/abrekadaver, ripper_213@hotmail.com, abysspawn@hotmail.com). Label contact: www.myspace.com/rawforceproductions.