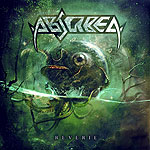 At last another great example of a band that is saved from total oblivion, thanks to a complete compilation. This time, Spanish ABSORBED is the lucky one. Ages ago, these guys were introduced to me when there were a few lines written about them during a special about the Spanish underground in the Dutch underground zine Mortician Mag. ABSORBED didn’t have an official demo at that time, but their rehearsal tape made it worth to be mentioned. Source for this scene report was Dave Rotten of Drowned Productions. More than twenty years later, this same guy released this compilation on his label Xtreem Music. Today, ABSORBED belongs to the past. Some members might be known for contributions in UNREAL OVERFLOWS or DISMAL, but it seems that any trace ends here. Possible reason might be that in the end certain recordings were decided not to be released, like the album "Reverie" and the 7" EP "Abstract Absurdity" from 1993. Too bad, because their 1992 demo "Unreal Overflows" got some pretty good reviews. After this demo, ABSORBED participated in the 1994 split CD "Avowals" on Shiver Records together with UNNATURAL and DISMAL. Yours sincerey, hadn’t heard a single ABSORBED song until now, but because the sources of information can be considered as holy, I assumed that this band lived up to the expectations and justified this re-release. "Reverie" probably covers everything the band ever released, spread over two CDs. CD 1 contains their debut "Reverie" with three extra songs (alternative versions of ‘Quantum Leap’, ‘Cosmos (World Eneaded World)’ and ‘Source Of The Spice’) and the four tracks of "Avowals". On "Reverie" you’ll get mainly technical Death Metal that sounds pretty soft. There’s hardly any agression and they’re not afraid to use keyboards every now and then. Readers that didn’t leave already, can be informed that instead you’ll get quality songwriting and riffing that make it sound soild and convincing enough that you won’t miss the anger and wonder why the band didn’t release their debut. It would’ve most likely caused tons of interest outside the extreme Metal scene. Oooh wait, vocalist José grunts his lungs out, so this seems unlikely in the end. The tracks on "Avowals" are more intense and reminded of ATHEIST, GORGUTS and even SINDROME. Once again great riffing, wide leads and a drummer that covers single every millimetre. Especially the vocals of José Barros made a big impression here and reminded of John Edlund. Some letdowns were misplaced keyboards, the funky bass-eruptions and some vocals on ‘Outerdimensional Deployment’, but apart from that, "Avowals" is a remarkable release in European technical Death Metal! CD 2 covers the "Abstract Absurdity" EP, the "Unreal Overflows" demo, the "Chronogical Turbulence" (Live ’96 tape?) and the already mentioned "Rehearsal Promo ’91" (Demo ’91). You’ll definitely hear the band was lacking some skills on most of them. The production demands your persistence, especially on the rehearsal and EP, but "Unreal Overflows" is a great example of talented and classy Death Metal (and better than "Abstract Absurdity"). Good maybe for those of you who liked early CENOTAPH (Mexico), KRABATHOR or DEPRAVITY. Considering their age and the scene at that time, ABSORBED can be considered as some of the best Spain had to offer. The "Chronogical Turbulence" is a nice bonus, but "Unreal Overflows", "Reverie" and especially "Avowals" make it a worthy purchase for every Death Metal archaeologist. Check out for yourself on www.facebook.com/pages/absorbed-spanish-death-metal-cult-band-1991-1996/220526417977170, www.xtreemmusic.com