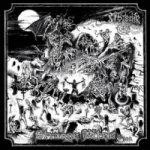 The debut album of these American Death trio formed back in 2006, presents 10 song of early GRAVE influenced Death Metal, that at times also sound like early ENTOMBED / DISMEMBER due to the fat guitar sound, but I can also hear some small Grind here and there to add insult to injury. So, after the massacre stops one if left with a quite good impression of a band playing tribute to their elder gods, thus doing so in their very personal way. As of today, there is obviously little to say about if things like these have been done before or not. Well, that is the case here. ABYSME sounds the way the demo recordings of the aforementioned band would sound like if recorded in the same spirit, which also means that it is way polished and has fewer riffs that remains in the undead brain of the listener. I can actually think of a couple of bands that playing nowadays a similar style are better riff-masters and do create more memorable songs, but this time the band has chosen to go to the style their influences were doing on the demo days, but with a better production and execution. A vinyl version will also be available for those collectors of the format. I am sure that die hard demo-days Svensk Döds Metal will find this quite interesting. www.abysme.com, www.facebook.com//pages/abysme/130110067045260, www.hellthrasher.com