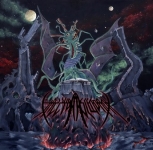 ABYSSAL ASCENDANT
Chronicles Of The Doomed Worlds, Part I: Enlightenment From Beyond
(Dolorem Records)
43:21min

There are plenty of bands out there devoted to the ancient ones and able to create some exceptional musical moments rather than elevating line-up changes to an abstract science. So instead of speculating about the latest development regarding MORBID ANGEL the decent Death Metal lunatics may keep calm and listen to “Chronicles Of The Doomed Worlds, Part I: Enlightenment From Beyond” by ABYSSAL ASCENDANT from France. After a self-produced EP in 2013 they now unleash their debut upon mankind. Heavily influenced by MORBID ANGEL, NOCTURNUS and HATE ETERNAL musically and conceptually by authors H.P. Lovecraft and Clark Ashton Smith the three musicians unfold supreme chaos, swirling madness and lurking terror. Based on a solid Death Metal ground each song offers a wide variety of rhythm changes, double-bass drumming on a massive scale and a huge amount of weird, chaotic and twisted riffs and guitar solos. The vocals are typical Death Metal and although the vocalist is not one of the top Death Metal vocal artists he really tries his best to underline the sick atmosphere. What I like most is the fact that the band avoids two traps. The first is the technical trap. Some brutal and technical Death Metal bands are just playing according to the motto faster and complexer and the feeling for the songs completely gets lost. The other trap is the atmosphere. Some musicians are adding keyboards and other alien elements to create atmosphere. But ABYSSAL ASCENDANT are technical and brutal and still able to concentrate on writing songs and they do not need anything else but some fine riffs and distinguished songwriting to create this special Lovecraftian vibe. Highly appreciated! www.facebook.com/abyssal.ascendant.band, www.doloremrecords.com