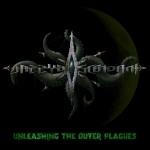 I like to come across new Death Metal bands, especially in these days where the scene is thriving and some of the new bands actually deliver some nice outputs. ABYSSAL ASCENDANT is a new entity from France, hailing the ancient ones and what dwells beneath, subjects that have been touched quite a lot during the ages of Death Metal, with varying results. It is not always easy to deal with one of the stables of esoteric Death Metal topics. ABYSSAL ASCENDANT pays homage to a great deal of the old masters of the genre, we are getting a good deal of impressions from South America, to USA to old European hordes, all who used to or still fill our void of real Death Metal, the wide array of inspirations are boiled into a thick soup, that is impressively close to a style that the band can call their own, even though their inspirational sources here and there shine through. I like the way the band has built up their riffing, there are some quite good moments of guitar mayhem, some shredding bass and the vocals that are all over with all from the classical growl to a puked gasp suits the music. The band does almost always succeed in drenching the music in a thick dark and mysterious atmosphere. Though it can be heard that the band is young, as the song writing skills could use a little fine tuning, as not all elements in the songs are tied totally together, as when we get a frantic and well performed guitar lead coming out of a great bridge separated with a bit of silence, before the madness begins. Though such details will usually be taken care of as a band develops, as musicians and songwriters. If you like your Death Metal dark and atmospheric, slightly chaotic and once has succumbed to Yog-Sothoth, you should check out these guys and gal, as they have something to offer. And I do look forward to hear how they develop as the seeds for something good has been sown. In the future, which is now, they’ll also incorporate a human drummer into the sound picture, something that will not hurt in the length. There are flaws here and there, and some not quite worked through passages, but that is all a charm with a band’s first release, when the base is tolerable and quite enjoyable. Pass through the gate of the silver key, though beware; Aforgomon is lurking: www.abyssalascendant.com, http://abyssal-ascendant.bandcamp.com